The Memorandum of Understanding (MoU) between the Mission and Panama was signed yesterday by the Revd Canon Andrew Wright, Secretary General of The Mission to Seafarers, and Jorge Barakat Pitty, Minister of Maritime Affairs and Administrator of the Panama Maritime Authority (AMP). The signing ceremony took place at the International Maritime Organisation in London.

The agreement recognises the work of the Mission to Seafarers in Panama and will enable the Mission to establish welfare services at all major Panamanian ports, including the Panama Canal, one of the busiest waterways in the world. As a result, the Mission becomes the first seafarer welfare charity to operate in this important strategic location for global shipping, which links the Pacific and Atlantic oceans. 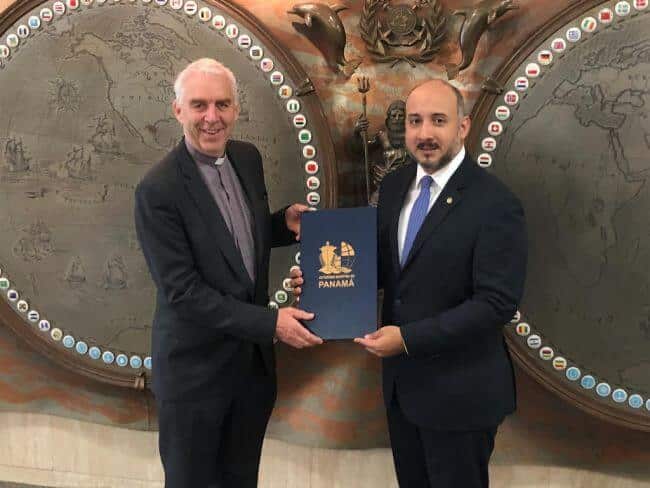 Speaking after the signing of the agreement, Canon Andrew Wright, Secretary General, The Mission to Seafarers, said:

“We are proud of our global network of seafarers’ centres, which spans over 200 ports and 50 countries, and today’s agreement is a vital piece in this jigsaw, given the importance of Panama as a maritime hub and the essential role of the Panama Canal in international shipping.

“We are grateful to the Panama Maritime Authority for their support for seafarer welfare and their commitment to ensuring that all crews in Panamanian waters have access to welfare and wellbeing services. This agreement between the Mission and the Panama Maritime Authority will enable the many thousands of seafarers who pass through the Panama Canal and who call at Panama’s ports to have access to our wide range of professional chaplaincy services, whenever they need it.”

As part of the agreement, the Panama Maritime Authority has also agreed to support and facilitate the creation of the National Board of Wellbeing of the Seafarers and Port Wellness Committees, a new body to promote and assess the needs of wellness installations of seafarers in Panama.

The Mission to Seafarers operates a global network spanning over 200 ports and 50 countries, offering a wide range of services to seafarers and their families. Last year the Mission conducted around 65,000 ship visits, encountering around 325,000 men and women and offering support where it was needed. In addition, the Mission welcomed 580,000 seafarers to its 121 seafarers’ centres, and carried out 895 justice, welfare and medical cases.