On the International Day of Happiness, seafarer welfare charity, The Mission to Seafarers, urged international shipping to take seafarer happiness more seriously as a success indicator and key factor in growth. The Seafarers Happiness Index showed a decline in happiness since the last survey in 2016 by social network Crewtoo, with isolation and poor working practices posing serious threats to the reputation of the profession and the ability to recruit.

Seafarers, nearly 60% of whom were from South East Asia and the Indian Subcontinent, were asked to mark their happiness out of ten on a variety of measures. Total happiness among seafarers declined from 6.41 in 2016 to 6.25 in 2017. Workload and onshore facilities presented the largest setbacks, while onboard interactions and friendships were seen as the best part of the job. The most divided issue was connectivity with family and home. Where internet access was available to seafarers, happiness was marked very highly, but without it, connectivity was a significant source of discontent. 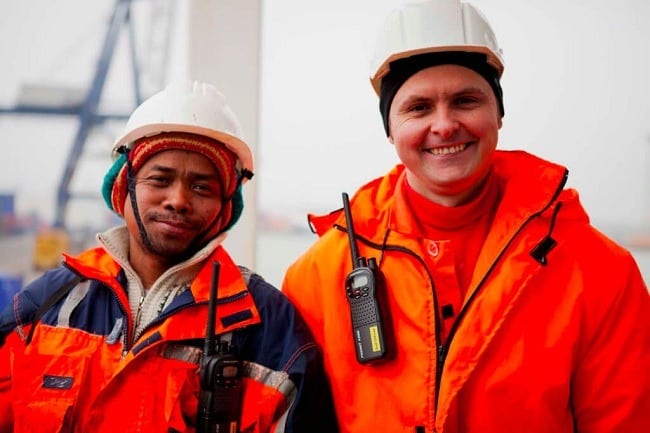 “We often see discussions around the recruitment, retention, training and provision for seafarers in the shipping industry. However, these conversations are too often based on assumption and anecdote rather than real data. By re-launching the Seafarers Happiness Index we are working to provide reliable information so that the industry can build a sustainable workforce for the future of the industry.

“Seafarer happiness is a key measure of progress and growth, as well as a tool to understand how we safeguard the future of the industry. Already we have seen patterns emerge when it comes to making a career at sea appealing. Seafarers don’t shirk from hard work for fair pay, but like all of us, they need mental and physical downtime. Too often it seems seafarers lack outlets like the opportunity to talk to family, exercise, take a break onshore, or even get enough rest. Onboard a seafarer gives their entire work-life balance over to the schedule and facilities provided for them. Without respite from work and colleagues, problems and pressures build and fester. We must work to make life at sea happier.”

Connecting with home: It was clear that where shipowners equipped vessels for modern standards of connectivity, crews were much happier. Seafarers who have access to the internet to communicate with family and friends back home listed happiness scores of 8s, 9s and 10s in this category. However, the picture was very divided: those who didn’t have this connectivity highlighted the pain that disconnection from home can cause. There were repeated and clear calls for every seafarer to have reasonably-priced internet access that provides sufficient speed and bandwidth.

Lifestyle and the sea: It is clear that the romanticised notion of a life at sea still holds a draw. Reports from seafarers of sunsets, sunrises and changing skylines were often rich with poetic phrasing. Working at sea provides an ever-changing backdrop to life, and with the right opportunities and facilities, there is the potential for seafaring to once again position itself as an incredible and adventurous profession.

Pressure and workload: The lowest scored aspect on this Seafarers Happiness Index was the workload, and it seems that there are real problems out at sea. The Mission received some brutal assessments from seafarers about the workloads they are asked to tolerate. The workload was also held responsible for impacting other key happiness indicators. There was evidence that even if exercise equipment was provided, seafarers don’t have the time to build exercise into their routines and that heavy workloads in ports are impacting the availability of shore leave. While serving, seafarers spend their entire lives in their workplace and with colleagues. To make the profession appealing the industry must find ways to ensure they have sufficient rest and personal time.

Port facilities: Areas without seafarers’ centres are a source of annoyance and frustration for crews. Around the world, seafarers depend on access to seafarers’ clubs, hubs, lounges or missions. Some seafarers reported never having seen welfare facilities on the runs and port calls they made. One comment stated, “seafarer’s missions all over the world are always a welcome sight to us”, adding that it should be “mandatory to have a seaman’s club in every port”.

Unfortunately, as well as revealing the things that are making seafarers happy, more troubling things have also been exposed by the survey. Ranging from the unethical to the illegal, it is clear that there are still cultural and compliance issues to address in shipping alongside promoting happiness.

One respondent stated that they had a company policy of “no shore leave”. Other seafarers stated that they feel unable to complain or ask for improvements, as their jobs were perceived to be under threat if they did.

Some companies were cited as breaking labour laws. This was especially prevalent when it came to the lashing of cargoes without pay, but also included hours of rest not being followed and overtime agreements being reneged on. These are serious indications that a significant number of shipping businesses are exploiting seafarers and in breach of laws to protect them and ensure safety onboard.

Andrew Wright, Secretary General of The Mission to Seafarers, commented:

“As in many things, it’s too easy to focus on the most negative aspects of this Happiness Index to the detriment of the positives that we have seen. The community of seafaring – the friends, co-workers and the teamwork that are the foundation of world trade – continues to be rewarding personally, professionally and financially. The call of the ocean and the allure of a life at sea continue to be at the heart of what it means to be a seafarer, as it has been for centuries. There is real happiness to be found at sea, and this report is an opportunity to build on the good and make seafaring an appealing lifestyle as well as a rewarding career.

“That is not to say that we shouldn’t be concerned that seafarers are being let down in a multitude of small ways, and some significant and illegal ones. For an industry that often discusses its workforce as ‘the human element’, it seems that it’s all too easy to forget their humanity. The industry must address their needs as people with hopes, dreams, loves and losses as much as their physical needs if we are to create a sustainable and happy future for shipping.”

“This International Day of Happiness is giving us our first opportunity to reflect on seafarer happiness and how we can work to improve it. But it’s vital to say that this is not a ‘measure and forget’ exercise. We’re going to be constantly seeking seafarer feedback to map how happiness changes as the industry progress. As well as asking seafarers to take part individually, we’d also welcome the participation of shipowners, charterers and managers who are keen to take a measure of happiness within their own seafaring workforce.”