During the “Hydrodynamic and Simulation Applied to Inland Waterways and Port Approaches” Conference, organized by Société Hydrotechnique de France in Paris, Siport21 presented the Methodology to Analyze the Moored Ship Behaviour Due to Passing Ships Effects. This methodology was applied to analyze the feasibility of a new terminal from an operational point of view.

The aim of the study is to analyse the effects of passing ships, selected from traffic data in the area, on moored vessels at the new terminal. In view of all the previous results, different alternatives were proposed in order to improve the conditions obtained in the analysis and raise the operation limits. 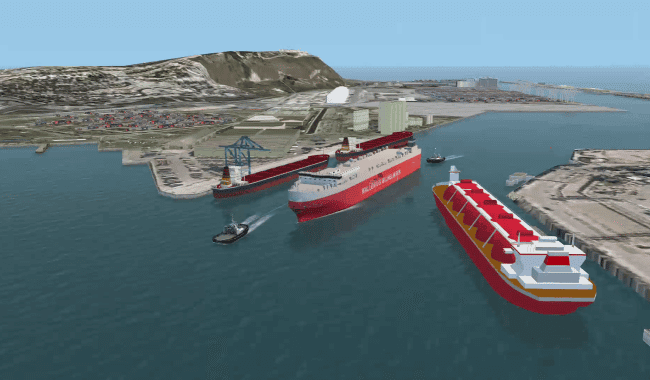 A new solid bulk terminal is planned to operate in the Port of Barcelona (Spain). Before it starts operating, this methodology has been applied in the new terminal. The design vessels to operate in the terminal are two bulk carriers 230 m and 186 m Loa respectively. These ships will be moored at the berth simultaneously and might be affected by the passing ship effect (car-carriers and tankers sailing to the inner basin).

To sum up, the access manoeuvres of the mentioned vessels were analysed in different scenarios, in order to assess the operative limits, passing speed and distance required. Afterwards, the effects were analysed of suction forces and moments generated by the  passing vessel on the moored vessels. Finally, Siport21 carried out recommendations for minimize these effects and optimize their operation.

Pioneer in the installation and implementation of numerical ship manoeuvring models and ship manoeuvring simulators in a private company in Spain. Since 1999, Siport21 has developed approximately 700 technical studies spread out over almost all the Spanish coast and they have worked in 33 other countries.