The first two passenger vessels built by Louisiana-based shipbuilder Metal Shark for New York’s new NYC Ferry have been completed and are now making their way to New York.

Late last week at Metal Shark’s Franklin, Louisiana shipyard, the Incat Crowther-designed, 149-passenger, USCG Subchapter T passenger ferries were handed off to crews from HNY Ferry Fleet LLC (a Hornblower company), operator of the new passenger vessel service. Both of the Metal Shark-built ferries are currently running in tandem, making their way northward in the Atlantic after running the Gulf of Mexico coastline and rounding Key West. 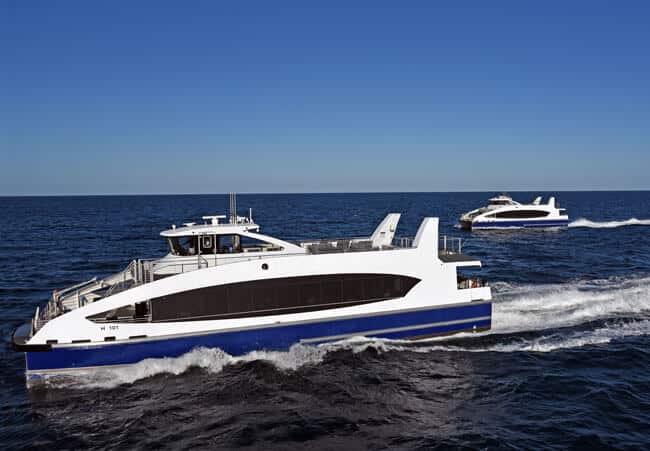 The boats are expected to arrive in New York within the next few days.

“We produced these first two ferries from start to finish in less than nine months, which is a feat that was deemed impossible by many,” said Metal Shark CEO Chris Allard. “However, we were confident in our team and our ability to make it happen.”

“From start to finish we’ve enjoyed excellent communication and cooperation between Incat Crowther, our own naval architects and project managers, and Hornblower,” said Carl Wegener, Metal Shark’s director of commercial sales. “So much effort went into the construction of these boats. It’s been an honor to build them and send them to New York, where they’ll become a valuable part of the city’s transit infrastructure for years to come.”