Container shipping lines are poised to take delivery of a new generation of “megaships” over the next two years, just as the growth of world trade is slowing down, contributing to massive overcapacity in the market.

Megaships, which can be up to 400 metres long, seem to be here to stay, not least because so many more are already on order, the product of high fuel costs and low interest rates.

But the trend towards larger vessels is not without problems especially for other businesses in the transport system and the trend could be nearing its limit as the economies of scale associated with megaships decline.

Container shipping capacity has doubled every seven years since the turn of the millennium and will reach nearly 20 million twenty-foot equivalent units (TEU) in 2015 up from 5 million TEUs in 2000.

But since the financial crisis, container capacity has continued to grow rapidly, even as the growth in freight volumes has slowed, creating a massive overhang in shipping capacity and pressuring freight rates.

Capacity growth is being driven by the trend towards larger vessels. The size of container ships has been growing faster than for any other ship type according to the OECD’s International Transport Forum. 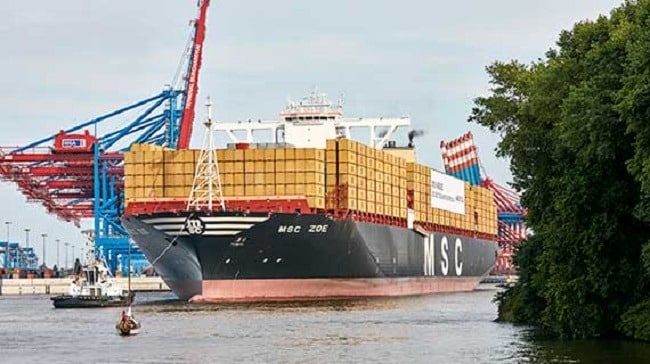 Between 1996 and 2015, the average carrying capacity of container ships increased 90 percent, compared with a 55 percent increase for dry bulk carriers and 21 percent for tankers (“The impact of megaships” 2015).

Both the average size of new container ships and the maximum size is set to continue growing over the next five years.

Shipping lines have already taken ownership of 20 megaships with a capacity of more than 18,000 TEU each and another 52 are on order, according to the OECD.

Megaships are being introduced into service between the Far East and North Europe, the world’s largest route by volume, where potential economies of scale are greatest, but are having a cascade effect on other routes.

Large ships that formerly plied the Far East-North Europe route are being displaced into Trans-Pacific service, and former Trans-Pacific carriers are moving to the Trans-Atlantic route.

The new generation of ultra-efficient megaships is credited with cutting the cost of shipping even further and lowering greenhouse gas emissions.

But researchers for the OECD question whether megaships are contributing to unsustainable overcapacity and imposing unintended costs on shippers, port operators, freight forwarders, logistics firms and insurers.

The new generation of megaships is the lagged effect of the era of high oil prices between 2004 and 2014 and low interest rates since the financial crisis in 2008.

Costs in the shipping industry can be divided into the capital costs associated with the construction of new vessels, operating costs, and voyaging costs primarily related to fuel consumption.

Construction costs increase more slowly than ship size. Increasing a container ship from 16,000 TEU to 19,000 TEU cuts the annual capital cost per TEU-slot by around $69 according to the OECD.

Larger ships are slightly more operationally efficient than smaller ones, with an annual saving of perhaps $50 per slot on a 19,000 TEU ship compared with a 16,000 TEU vessel.

But the real savings are on the fuel bills. Megaships are “astonishingly fuel efficient” and actually consume less fuel on a voyage than 16,000 TEU carriers, according to the OECD.

With overwhelming cost advantages, especially on fuel, and cheap finance readily available, the upsizing decision appears to have been a straightforward one for shipping lines.

The new generation of megacarriers has been optimised to save fuel by voyaging much more slowly than previous container vessels.

Fuel consumption is related to the cube of speed. If a vessel travels twice as fast it will consume eight times as much fuel. The cube-rule has important implications for the economics of the shipping industry.

During the period of soaring oil prices, container lines instructed captains to cut speed in order to conserve fuel.

The new ships ordered were specifically designed to operate most efficiently at slower speeds to take advantage of slow steaming economies. In fact some carriers are so large they cannot operate at higher speeds.

Crucially, slow steaming has now been designed into the new generation of vessels entering container service, so it will not be easily reversed, even though fuel prices have plunged since 2014.

According to the OECD, most of the voyaging cost reductions in the new generation of megaships come from their optimisation for slow steaming rather than from increased size.

“Between 55 and 63 percent (at least) of the savings per TEU when upgrading the vessel size from an early 15,000 TEU design to a modern 19,000 TEU design are actually attributable to the layout for lower operation speeds,” the OECD estimated.

“Cost savings are decreasing as ships become bigger,” the OECD concluded. “A large share of the cost savings were achieved by ship upsizing to 5,000 TEU, which more than halved the unit costs per TEU, but the cost savings beyond that capacity are much smaller.”

The consolidation of container volumes into fewer, larger megaships is creating challenges for other firms in the freight business.

Insurers are worried about the costs if a megaship sinks or develops mechanical problems. Insurer Allianz has warned the industry must prepare for losses of more than $1 billion, or even up to $2 billion in the event of a collision between two megaships (“Safety and shipping review 2015”).

Economies of scale depend on megacarriers being loaded close to maximum capacity and spending as much time as possible at sea rather than in port.

The need to fill megaships is one reason that the industry is consolidating into an alliance network.

Shipping schedules for the megacarriers have been consolidated into fewer sailings each week from fewer ports (about six in North Europe and eight in Asia).

Containers for other destinations must be transhipped, either on a smaller container vessel or by road, rail and barge.

Port operators, too, have been forced to invest heavily to attract and handle the new megacarriers. Port channels must be dredged to greater depths to handle the deeper drafts of the megaships. Quaysides must be raised and strengthened to handle the increased forces when a megaship is tied up.

The biggest problem comes from the scramble to unload a megacarrier quickly so it can put to sea again. The average turnaround time for a container ship is now just 1 day, and less in Asia.

The arrival of fewer vessels but with larger numbers of containers is creating intense peak time pressure on the ports.

Ports need more cranes, more highly skilled staff to operate them fast, more space in the yard, and the ability to handle more trucks, railcars and barges to move the containers inland.

The OECD estimates megaships are increasing landside costs by up to $400 million per year (one third for extra equipment, one third for dredging, and one third for port infrastructure and hinterland costs).