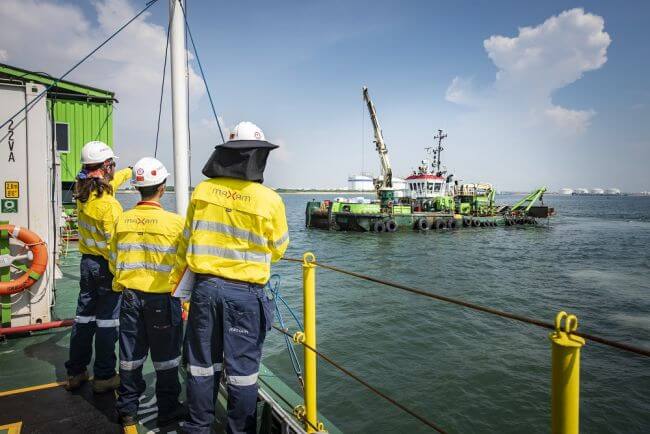 MAXAM, a global technology company specializing in energetic materials and blasting solutions, has successfully concluded underwater blasting for the Singapore Port extension, a project that has been awarded to DIAP-Daelim JV (DDJV), with the support of Asia Tunneling & Construction Pte Ltd. The operation consists of reclaiming 294 hectares from the sea for the construction of an almost nine-kilometre-long quay with a capacity of close to 20 million TEW per year.

A key part of the works has been the dredging of what will be the new navigation channel. Part of it has been done with underwater blasting, the largest one ever carried out, where MAXAM expertise and support has been crucial.

The company has worked with the DIAP in the design and execution of more than one hundred blasts and nearly 1,000 tons of RIOFLEX to fragment the hardest rock. The underwater detonations were performed at depths ranging from 15 to over 25 meters. In addition, MAXAM has been responsible for the supply of explosives from its manufacturing plant in Malaysia.

“This project demonstrates the confidence that leading international infrastructure companies have in MAXAM as a strategic technological partner for their projects. In recent years we have become the benchmark in underwater blasting thanks to our experience in projects around the world and our technical service and technological expertise. This project is also yet another step in our growth in Asia, where we are already operating in countries such as Russia, Kazakhstan, Mongolia, Malaysia and the Philippines, among others”, explains Ramón Paramio, MAXAM Terra Solutions General Manager.

Singapore is involved in the construction of a new cargo port with which it will strengthen its position as a strategic hub for international trade. The Asian country is currently developing a hyper-modern, innovative, highly automated facility, that, once completed, will have a 65 million TEU capacity per year.

MAXAM has become the world leader in this type of work, having been previously involved in the expansion of the Panama Canal, as well as similar projects in Egypt, Brazil and Spain, among others. Besides its unmatched experience in such operations, the company has developed state-of-the-art technology for both loading systems and high-energy explosives that offer excellent underwater results and really set MAXAM apart.

In the manufacture, transport, storage and loading process, MAXAM uses an oxide matrix that is sensitized once inside the borehole, becoming explosive. This is a key differential aspect when compared with traditional methods of underwater excavation.

For this project, MAXAM built a RIOFLEX matrix plant in Malaysia to guarantee reliable, constant supply for the operation. The company’s engineering teams also collaborated closely with the client to engineer the loading systems built into the drills, increasing safety and productivity in the drilling and blasting process.

The company’s responsibility in the planning of the blasting was twofold: to obtain rock fragmentation easily retrievable by dredgers as requested by the client, and not exceed vibration limits authorized by the Singapore port authorities to protect nearby structures.

After more than 100 blasts and nearly 1,000 tons of RIOFLEX, MAXAM has finished its involvement in the company’s first Singapore project, meeting the highest safety and environmental standards, an absolute priority in all its operations.