MV Wakashio, the bulk carrier that ran aground a reef at Pointe d’Esny on the southeast coast of Mauritius has now caused potentially lasting damage after 1000 tones of oil spilt into the Indian Ocean on Thursday, 6th Aug 2020.

The ship carrying 3800 tonnes of fuel was stranded on the reef since the 25th of July, 2020 following which a salvage team was sent. No injuries were reported by the crew of 20 members who are now quarantining on the island, confirmed owner Nagishiki Shipping.

However, the battering waves caused a crack in the hull. The salvage team was evacuated and about 500 tonnes of fuel was extracted out of the vessel. About 400 booms deployed to contain the spill wasn’t enough either. There remain about 2,500 tonnes currently. 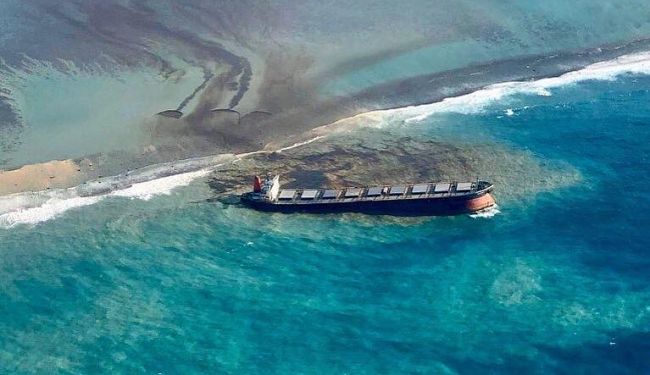 The cracked ship leaked dark slick fuel into the clear waters near the wetland triggering an environmental emergency as announced by the Prime Minister of Mauritius, Pravin Jugnauth in the fear that causing an ecological disaster that could endanger the marine life.

Holding back the oil might be difficult in the current scenario owing to bad weather conditions that might spread the oil flow towards the mainland. One of the ship’s owners Nagishiki Shipping released a statement saying, “Nagashiki Shipping takes its environmental responsibilities extremely seriously and will take every effort with partner agencies and contractors to protect the marine environment and prevent further pollution.”

Ecologists and marine experts remain afraid of the impact of the ship’s damage. Local groups, as well as the Mauritius Marine Convention Society, are concerned that the ‘clean up’ may take a lot more time than it seems to be.

The Mauritius Marine Wildlife society is working to free the stuck seabirds and turtles as thousands of marine life were “at risk of drowning in sea pollution”, as per Greenpeace Africa. 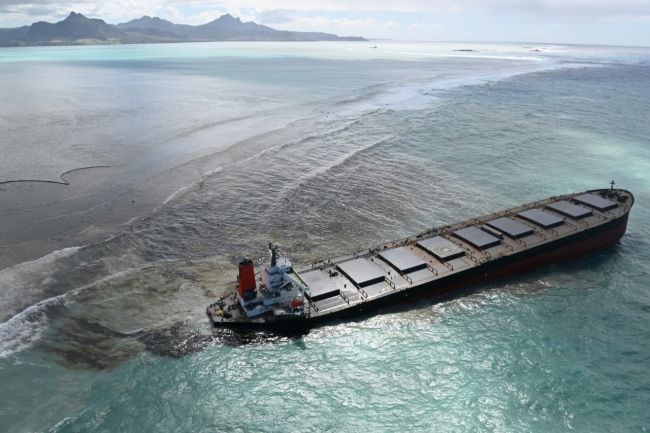 Along with this, locals too are pitching in to assist, even though it might go against government orders to venture close to seas during harsh weather conditions. Volunteers hurried to fill sacks with straws in the field to create absorbing agents.

Mitsui OSK Lines, the ship operator has now apologised profusely for the trouble caused and have confirmed that they are “ready to do anything in their power to resolve the issue”.

The problems are however on a large scale as the oil spill threatens the economy of Mauritius, which is hugely dependent on tourism, its food security and health. The PM has also appealed to the UN for urgent aid and experts to tackle the disaster.

France and Japan have agreed to help out as the latter is equipping to send a 6-member relief team while France will be sending a specialist team to cope with marine pollution.

“When biodiversity is in peril, there is urgency to act”, said Emmanuel Marcon, the French President.

Mauritius is the only African country with zero COVID-19 cases. However, the PM has said that the oil spill “represents a danger” to its population of 1.3 million people, heavily reliant on sea tourism.

⚠️PLEASE SHARE AS WE MUST GET MORE HELP FOR MAURITIUS!⚠️ This oil spill is happening now in Mauritius as their coastline is covered in thick black oil, killing all wildlife & marine life in its path, but they’re ill-equipped for the cleanup SO please retweet/let’s get them help! pic.twitter.com/KB7L22qoYz