Matson, Inc., a leading U.S. carrier in the Pacific, and General Dynamics NASSCO shipyard christened the largest combination container/roll-on, roll-off (“con-ro”) ship ever built in the United States in a ceremony at the NASSCO shipyard in San Diego, CA on Saturday, June 15.

The new vessel is named ‘Lurline,’ an iconic name in Matson’s long history, dating to the construction of Captain William Matson’s first ship of that name in 1887. Four more ships were given the name in subsequent years; this vessel will be the sixth.

The new Lurline is the first of two new ships being built for Honolulu-based Matson by NASSCO at a total cost of approximately $500 million for the pair, and the third of four new vessels that Matson will put into service during 2018, 2019 and 2020. Named in honor of the ocean deity revered in the native Hawaiian culture, Matson’s two “Kanaloa Class” vessels under construction at the NASSCO shipyard are being built on a 3,500 TEU* vessel platform. 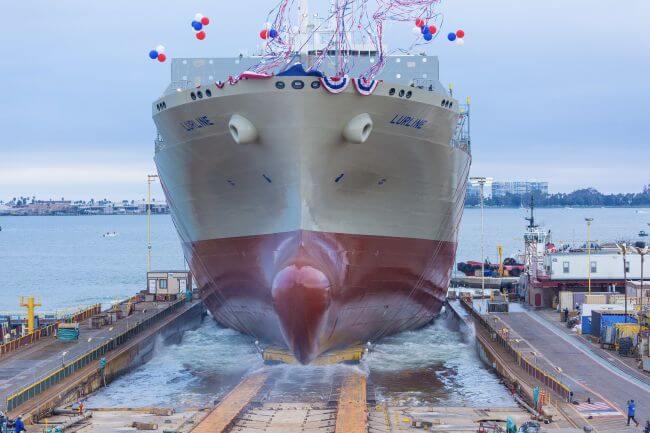 At 870 feet long, 114 feet wide (beam), with a deep draft of 38 feet and weighing in at over 50,000 metric tons, Lurline will be Matson’s largest ship and the largest con-ro vessel ever constructed in the U.S. It will also be one of Matson’s fastest vessels, with a top speed of 23 knots, helping ensure on-time deliveries in Hawaii from Matson’s three West Coast terminals in Seattle, Oakland and Long Beach.

Under the latest International Maritime Organization (IMO) requirements for engine manufacturers, Tier 3 engines reduce the levels of particulate emissions by 40 percent and nitrogen oxide emissions by 20 percent, as compared to Tier 2 standards.

“The great speed, capacity and environmental improvements of this new ship position us well to serve the needs of our communities in Hawaii for many years to come,” said Matt Cox, Matson’s chairman and chief executive officer, after the shipyard ceremony.

“As a proud U.S. company and Jones Act carrier, our investment in this new ship is about much more than maintaining a high level of service to Hawaii. It also helps drive substantial economic benefits in and opportunities in communities around the Pacific, where this vessel will operate,” Cox said.

“The construction of this ship requires 150,000 man hours to complete. It’s over a year’s work for about 2,000 professionals here at NASSCO…engineers, tradesmen and lots of support people. And over its expected lifespan, this ship will generate approximately 4.5 million man-hours of work opportunity for the U.S. mariners who will operate it…not to mention all the dock workers and terminal personnel that move the cargo on and off our ships, and all the people who produced the materials used to build this ship that are sourced here in the U.S….like the steel that came from Iowa and Alabama.

“These are all living wage jobs, supporting the families of these American workers, the taxes they pay…it all flows from this one ship,” Cox said, adding, “Multiply that by all the ships NASSCO and other U.S. shipyards are building, and you get a sense of the value of the maritime industry to our country and its economy. In California alone, there are more than 51,000 jobs tied to the American maritime industry, providing over 3.6 billion dollars in labor income with a total economic impact in the state of more than twelve billion dollars.”

“Designing and building the Lurline brings pride to every member of our team,” said Kevin Graney, president of General Dynamics NASSCO. “It’s an honor to add the Kanaloa Class vessels to NASSCO’s decades-long history in Jones Act ship production.”

Matson invited Constance Lau, a member of Matson’s board of directors, to officially christen the vessel by breaking a ceremonial bottle of champagne against the ship’s hull. Immediately after the bottle was broken, the vessel was released from its build ways and slid backward into San Diego Bay. Lurline was then docked at NASSCO’s nearby testing and trials berth, where the final stages of construction will be completed. Matson is expected to take delivery of the vessel in late October, 2019.

The ceremony was attended by approximately 700 people, including members of Matson’s and NASSCO’s executive and project teams, Matson board members, Navy and Coast Guard officials and members of the general public.