The Australian Maritime Safety Authority (AMSA) has recognised the master and crew of Panama-flagged car carrier MV Comet Ace for the remarkable rescue of a man over board in Vitiaz Strait on Saturday, 8 April 2017.

AMSA presented an award to the master and crew in Brisbane today, 12 April 2017, for their efforts in locating and recovering a young seafarer who had fallen into the ocean from Marshall Islands-flagged bulk carrier MV Cape Spencer. 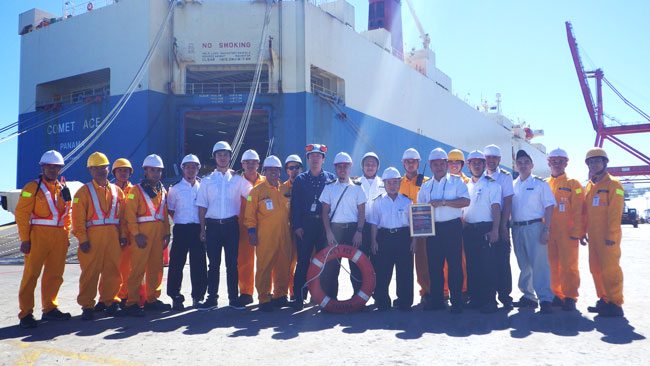 The Cape Spencer was transiting through Vitiaz Strait between the mainland of Papua New Guinea (PNG) and the island of New Britain in the early hours of Saturday morning when the cadet was noticed missing around 6.30 am AEST. He was last seen shortly before 4.30 am.

AMSA issued a broadcast to shipping in the area requesting assistance. The Comet Ace responded and diverted to the search area. Despite poor visibility the master and crew of the Comet Ace located the missing seafarer and successfully recovered him from the water at 7.30 am.

He was later transferred back onto the Cape Spencer with no reported injuries.

AMSA’s Joint Rescue Coordination Centre Manager Alan Lloyd said the seafarer was lucky to be alive after spending up to three hours in the water without a lifejacket.

“Every minute counts during a search and rescue operation, and without the assistance provided by the Comet Ace this may have been a different story,” Mr Lloyd said.

“Often those best-placed to respond to a man over board situation are the ships nearby.”

AMSA’s Cairns-based search and rescue jet was also on scene during the operation. Footage from the jet of the Cape Spencer and an image of the award presentation can be downloaded via the following link: