You are here: Home › Shipping News › Maritime Piracy Incidents Down In Q1 2019 But Kidnapping Risk In Gulf Of Guinea Persists – IMB
TwitterFacebookLinkedInPinterestBuffer 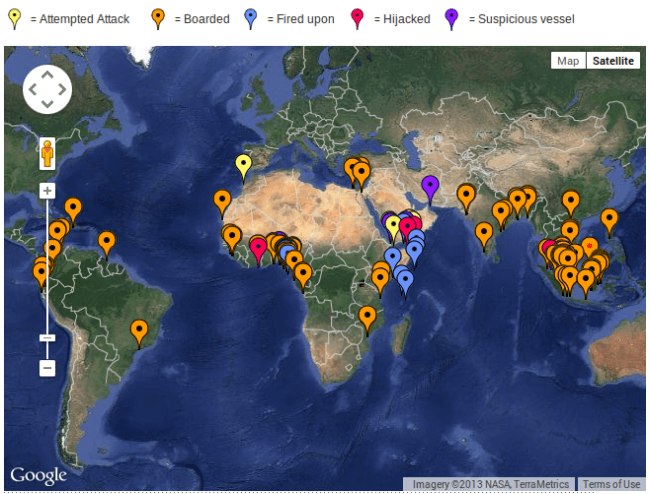 The IMB Piracy Reporting Centre, a 24-hour, free service offered by the IMB, enables shipmasters to report any incidents of piracy and armed robbery, globally against ships. Since 1991, the IMB Piracy Reporting Centre has provided the industry, government bodies and response agencies with timely data on the location of piracy and armed robbery incidents at sea.

“These latest statistics from the IMB Piracy Reporting Centre are encouraging. However, first quarter statistics is too short a period on which to anticipate trends over the year. It confirms the importance of information sharing and coordinated action between the industry and response agencies. Going forward, it is critical to continue to build more effective reporting structures to enable a strong, unified response when dealing with piracy incidents,” said IMB Director Pottengal Mukundan.

High risk in the Gulf of Guinea

The Gulf of Guinea represented a high number of piracy and armed robbery attacks at sea, with 22 incidents reported in the first quarter of 2019. The region also accounted for all of the worldwide crew kidnappings as 21 crew members were kidnapped across five separate incidents. Incidents were reported in the coastal countries, of Benin, Cameroon, Ghana, Ivory Coast, Liberia, Nigeria and Togo in the first quarter of 2019.

Gains in Nigeria, but caution urged

Nigeria has been a hotspot for piracy incidents over the past decade. However, in the first quarter of 2019, Nigeria experienced a decrease in reported piracy incidents. Nigeria reported 14 incidents of piracy for Q1 2019, in comparison to 22 incidents in Q1 2018. These results confirm the Nigerian Navy’s increased efforts to “actively respond to reported incidents by dispatching patrol boats,” the report notes. Despite these efforts, Nigerian waters remain risky for vessels, especially the port of Lagos where four incidents have been reported.

In Asia, Indonesia witnessed a decrease in piracy activities for the first quarter of 2019. There were only three incidents reported against anchored vessels in ports in Indonesia – the fewest reported incidents since 2010 – according to the report. As with Nigeria, increased cooperation and information sharing between the Indonesian Marine Police and IMB Piracy Reporting Centre has enabled regular patrols in high-risk areas.