Maritime education and training needs – now and in the future – were the focus of a high-level international symposium held during the 2015 World Maritime Day Parallel Event (20 – 21 July), hosted in Japan’s port city of Yokohama and its capital Tokyo. The event was held in conjunction with Japan’s Marine Day, which is a national holiday.

The opening session, held in Tokyo, was attended by Mr Shinzō Abe, the Prime Minister of Japan, and addressed by Mr Akihiro Ohta, Minister of Land, Infrastructure, Transport and Tourism, Japan.

In his opening speech, IMO Secretary-General Koji Sekimizu stressed the importance of quality training and education for the world’s future seafarers and highlighted the need to attract young people to maritime professions. 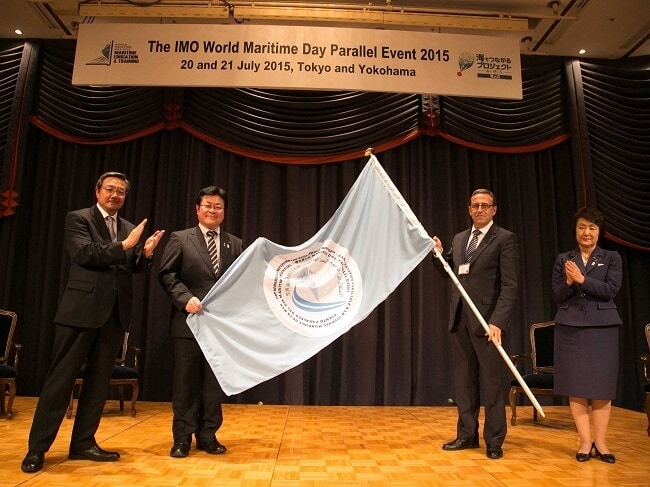 This was followed by a special session addressing the future needs of the industry, which aimed to discuss how educational organizations could go about educating and training high quality maritime human resources, which are necessary for quality shipping and how they could attract the interest of future generations towards the seas and the oceans.

A final session focused on the possibilities of utilizing maritime heritage and outreach programmes to attract future recruits to the seafaring and maritime professions.

Closing the event, Mr Sekimizu paid tribute to the organizers and remarked on the presence of many young people who were themselves in the early stages of their maritime careers: “I again congratulate the Ministry of Land, Infrastructure, Transport and Tourism as the host and organizer of this event,” he said. “This year has set a new standard for World Maritime Day Parallel Events, and I am very happy that organizers of future events such as the Islamic Republic of Iran, South Africa and of course Turkey are here to witness it. I was also very heartened to see so many cadets training for maritime careers attending these events in their uniforms. I hope that IMO Member States will also send their cadets to the celebration of World Maritime Day in London in September. We have many wonderful events planned, including two events for children, one for young children and another for older children about to make a career choice, as well as a symposium that will follow on to this one. The cadets would be most welcome at all these.”

Participants in the event supported, by acclamation, the Yokohama Declaration, a document that outlines a blueprint for the enhancement and strengthening of global maritime education and training in the context of increasing demand for shipping and seafarers in the years ahead. Among other provisions, it encourages holistic, multi-disciplinary education and training across several maritime-related disciplines, calls for IMO’s technical and legislative cooperation for developing countries to focus on strengthening capacity to effectively and efficiently implement IMO conventions, and refers to the need for greater public, political and financial support for maritime education and training.

During the closing ceremony, a commemorative plaque was presented to Japan by IMO Secretary-General Sekimizu and the World Maritime Day Parallel Event flag was handed over by Mr. Akihiro Nishimura, State Minister of Land, Infrastructure, Transport and Tourism, Japan, to Mr. Özkan Poyraz, Undersecretary, Republic of Turkey Ministry of Transport, Maritime Affairs and Communications. Turkey will host the 2016 parallel event.

During the second day of the parallel event, IMO Secretary-General handed over certificates to the newly-appointed IMO Maritime Ambassadors from Japan:

Congratulating them on their appointment, Mr. Sekimizu wished them every success in carrying out activities which would enthuse young people and promote careers at sea and in the maritime professions.