You are here: Home › Shipping News › Maritime Crime in South East Asia Drops to Lowest Levels for a Decade While Kidnap, Ransom and Sabotage Surge in Gulf of Guinea
TwitterFacebookLinkedInPinterestBuffer
Dryad Maritime, the UK’s leading maritime intelligence and operations company has released its Q1 2016 analysis of globally reported incidents of piracy and crime against mariners.

Providing expert analysis and insight on maritime piracy and crime around the world the report explores the global reduction of piracy across international waters during the first three months of 2016. In South East Asia there has been a 50% drop in reported maritime crime compared to the same period in 2015; the lowest figures recorded by Dryad in 10 years. Similarly, the end of Q1 2016 represents the longest period without attacks on MVs underway or at anchor within the Singapore Strait since Q1 2013.  Somali piracy continues to be broadly contained with no confirmed attacks on large merchant vessels since January 2014, despite some commentators’ views that the pirates continue to ‘probe.’ 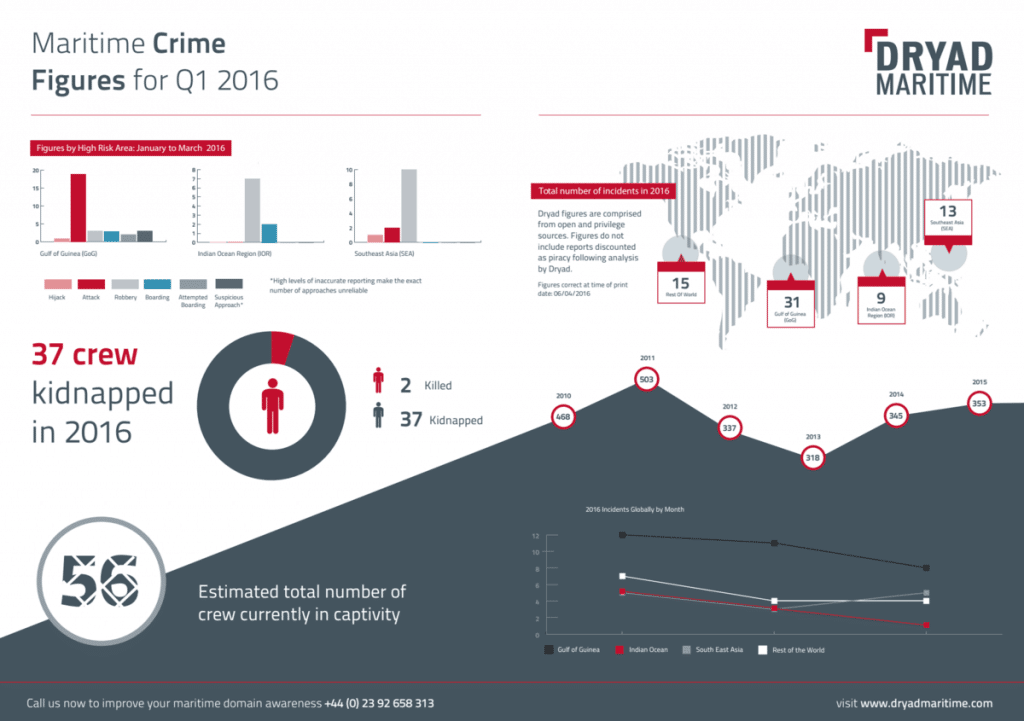 However, Dryad’s latest figures show that the Gulf of Guinea continues to blight an otherwise cautiously optimistic analysis. From January to March, the region saw a surge of industrial sabotage ashore, and offshore, the activity of Pirate Action Groups (PAGs) operating with impunity in the face of overstretched Nigerian naval patrols has surged.  14 commercial vessels were attacked off Rivers and Bayelsa States, with 8 raids classified as ‘unsuccessful’ due to evasive manoeuvring or the crew’s evasion of capture by retreating to their ship’s citadel. In 6 of these incidents, 23 crew-members were kidnapped for ransom, which is proving a far more effective business plan for PAGs than hijacking product tankers for cargo (instances of which have fallen dramatically in the last 18 months), despite one unsuccessful attempt which was thwarted by Nigerian forces in February.

“The first three months of 2016 have visibly demonstrated the dynamic nature of maritime crime and how effective action to combat it can turn the tide in favour of the good guys. There are some welcome causes for optimism in certain regions, notably the Indian Ocean where Somali piracy remains broadly contained, and in Southeast Asia where we have seen a remarkable turnaround in a little over six months to deliver our lowest first quarter figures in a decade. In other areas, such as the Gulf of Guinea, the picture is a less positive one, with kidnap of crew for ransom rampant off the Niger Delta. Wider concerns, from the effects of civil war and concerns over maritime terrorism to the impact of humanitarian crises such as maritime migration, continue to focus the minds of all with duty of care responsibilities for ships, crew and passengers, but these are manageable issues with proper planning and support.

Despite the good progress in some regions, we should avoid complacency at all costs. Criminal enterprises are adaptable and flexible and unencumbered by ethics, morality or international corporate law. No less business savvy than legitimate, law-abiding businesses, they can and will adapt to changing market conditions, finding new, less risky and more profitable ways of making their ill-gotten gains. The drop off in cargo theft and increase in kidnap activity in the Gulf of Guinea, could be one such example of this adaptability. Keeping one step ahead of the criminals is the key to what we do and how we help our clients.”

The analysis also provides as insight into the diverse and complex threats that shipping companies and mariners face in other regions.

“The last disruption of a Somali pirate action group was in January 2014 and we have not seen a confirmed attack since then, despite the numerous reports of so called ‘soft approaches’ being deterred by on board security and the talking up of the threat by some commentators whose business models depend upon a continued threat. We are by no means complacent, as conditions can change quickly and we need to avoid complacency and monitor the situation carefully, but we are in a period of de-escalation and a return to industrial levels of Somali piracy is unlikely.

In Southeast Asia, regional security forces and law enforcement deserve much credit for the improving situation in the area, especially for combatting product tanker hijack and the 2015 crime spree in the Singapore Strait by tackling the criminal gangs at source and by deterring those that might be tempted to work for them through education and more effective patrolling. It is not a completely positive picture, with concerns over terrorist related, maritime kidnap in the Sulu Sea and a worsening crime situation off Vietnam but, all things considered, the overall picture is a very positive one.

By contrast, the Gulf of Guinea has not got off to a good start in 2016. Kidnap of crew for ransom off the Niger Delta continues with the criminals growing in confidence and operating with impunity as they take crew members from ships in the region from under the noses of naval forces who have neither the resources nor the capability to routinely deter the criminals’ actions outside of their territorial waters. More optimistically, however, the complex and logistically difficult product tanker hijack has unsuccessfully reared its head, thanks to the actions of the Nigerian Navy who managed to thwart such an operation in February.”

ME-GI to Power Ultra-Large Hapag Lloyd Containerships
Want to share your tips and advice? Got questions? Visit the community forum to ask questions, get answers, meet people, and share your tips!