Dryad Maritime, the UK’s leading maritime intelligence company, today released their third quarter trends and analysis of global maritime crime showing a stark rise of 38% of incidents across Southeast Asia, when figures are compared to the first nine months of 2014. The apparent impunity of maritime gangs operating in the region has led Dryad to call upon the three nations surrounding the Singapore Strait, in particular, to provide a permanent security presence to deter criminals and protect maritime trade.

The number of reported incidents has jumped from 140 on the same nine-month period in 2014 to 194 in 2015. The main focus for criminal gangs in the region has been the petty theft of ships stores as gangs look to steal engine parts and high value machinery for resale on the black market. In total 14 vessels have been hijacked in Southeast Asia in 2015 to date, with only one product tanker, the MT Joaquim targeted for the purpose of cargo theft in the last quarter (Jul-Sep), when 3000 metric tonnes of fuel oil were stolen from the vessel.

Dryad Maritime analysts have identified the Singapore Strait as a key area for increased vigilance. Between January and September they recorded 90 instances of theft or attempted theft with more than 80% of these crimes occurring in the Traffic Separation Scheme (TSS) between Pulau Karimun Kecil and Pulau Besar during the hours of darkness. 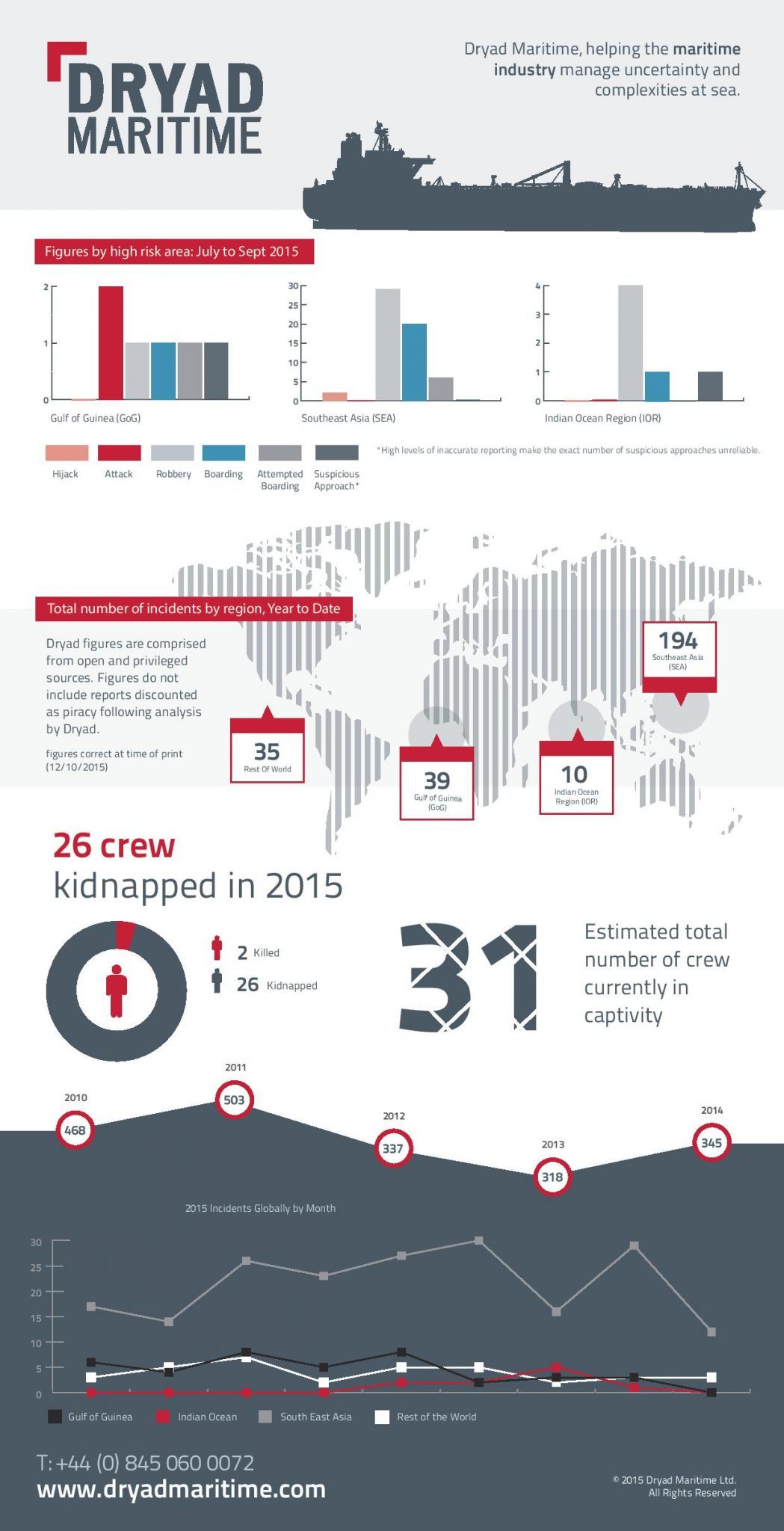 The Malaysian Maritime Enforcement Agency (MMEA) and Indonesian authorities have made repeated announcements pledging to enhance patrol cooperation and coordination in the region, yet according to Dryad analysts there remains little by way of a regular presence in this particular area. Dryad Maritime analysts warn that despite the slowdown in fuel siphoning incidents during the last three months, the final quarter of 2015 is likely to see a further increase in hijackings and petty theft.

Ian Millen, Dryad Maritime’s Chief Operating Officer; “In Southeast Asia, the final quarter of the last three years has seen the highest numbers of incidents per quarter and we see no reason why this will not remain the same this year; a year in which we’ve already seen the highest number of incidents in the first nine months. There is a pressing need for a joined-up security effort in the Singapore Strait and other areas. Without a high visual presence from security agencies, criminal gangs will continue to operate freely with little fear of capture or prosecution.”

Dryad contrasts its report of the worrying increase in Southeast Asia maritime crime with the good news following BIMCO’s recent announcement on a planned reduction of the BMP 4 High Risk Area (HRA).

Mike Edey, Dryad Maritime’s Head of Operations; “By complete contrast, the worrying figures in Southeast Asia come at a time when the combined efforts of the shipping industry, naval forces, armed guards and others have resulted in the first geographical reduction of the Indian Ocean High Risk Area (HRA). This is a testament to those who have taken a multi-faceted approach to containing the threat of Somali piracy and the first sign of a long-awaited period of de-escalation in the region. This will bring significant relief to the shipping industry who can, in some cases, transition to more cost-effective and dynamic methods of risk mitigation.”