The marine propulsion engine market was valued at $9 billion in 2015 and is projected to reach $12 billion by 2022, growing at a CAGR of 4.1% from 2016 to 2022, according to a new report published by Allied Market Research. Diesel propulsion system segment is expected to maintain its dominance throughout the forecast period. Asia-Pacific accounted for the highest share of 51% in 2015, and is anticipated to maintain this trend.

Marine propulsion engine creates thrust to move ship across the water by converting chemical energy to mechanical energy. Increase in production & sales of ships globally and rise in international seaborne trade drives the market growth. In addition, increase in demand for resources such as crude oil, coal, steel, and iron from developing countries is another driver for the growth of the market. 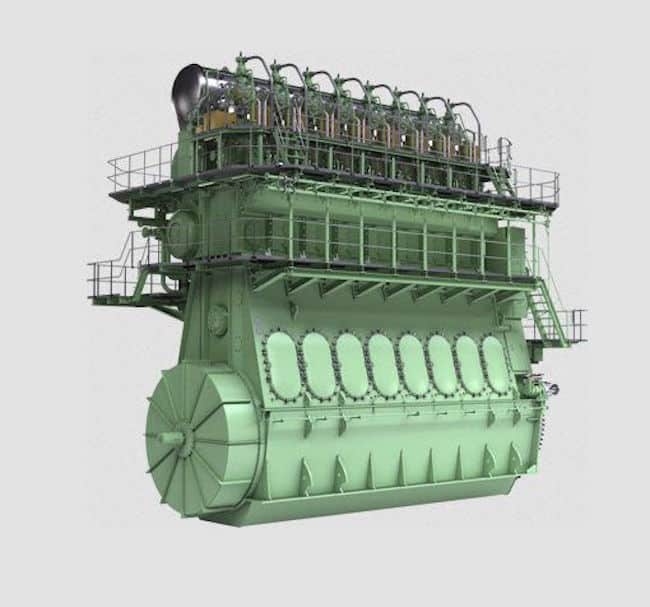 However, stringent environmental rules & regulations and large capital investment required to set up new manufacturing facilities hamper the market growth. Moreover, rise in usage of inland waterways and advancement in technology, such as new alternative fuel propulsion engine, are expected to provide lucrative opportunities for new products and boost the market growth.

Power source segment is divided into diesel, gas turbine, natural gas, and others (steam turbine, renewable energy, hybrid, and fuel cell). In 2015, diesel propulsion engine accounted for the largest revenue, and is anticipated to maintain its dominance throughout the forecast period. This is attributed to high efficiency and low cost of engine as compared to others. However, natural gas-powered engine segment is expected to witness the highest growth rate of 7.1%, owing to stringent emission rules and regulations.

By ship type, the market is categorized into cargo or container ship, tanker, bulk carrier, offshore vessel, passenger ship, and others (tugs & service ships). In 2015, cargo or container ship accounted for the largest market share due to rise in international seaborne trade of non-bulk cargo such as vehicles, food products, and electronics items. Bulk carrier segment is anticipated to show highest growth rate among ships type, owing to rise in demand of resources such as ore, coal, grains and other similar products in loose form.

Asia-Pacific accounted for majority of revenue in 2015, and is expected to maintain its dominance, followed by Europe and North America. This is attributed to the rise in shipbuilding industry of South Korea and China.

• Natural gas propulsion engine segment is expected to grow at a remarkable CAGR of 7.1%.

• Cargo or container ship segment led the overall market in 2015, and is estimated to grow at a CAGR of 2.8%.

• Bulk carrier segment is expected to grow at a remarkable CAGR of 5.4%.

• Asia-Pacific accounted for the largest market share in 2015, and is anticipated to grow at a CAGR of 4.5%.

• China and South Korea are the major shareholders, accounting for about half share of the Asia-Pacific marine propulsion engine market.

Why Are Oil And Gas Companies Calling For More Action On Climate Change?

V. Group Opens New State-Of-The-Art Centre Of Excellence In Mumbai
Want to share your tips and advice? Got questions? Visit the community forum to ask questions, get answers, meet people, and share your tips!