Knutsen OAS Shipping, the Norwegian operator, has ordered 4 × MAN B&W 5G70ME-GI engines with EGR systems in connection with the construction of two 180,000 m3 LNG tanker newbuildings. Upon delivery in 2020, the vessels will transport cargoes worldwide for two Spanish utility companies. The order follows the increasingly popular path initiated by Gas Natural Fenosa, the multinational Spanish group that was the pioneer in adopting ME-GI technology in an order for 4 × LNG tankers in 2013.

Bjarne Foldager – ‎Vice President Sales & Promotion, Two-Stroke Business at MAN Diesel & Turbo – said: “These orders are notable in that they are the 6th and 7th such carriers bound for service for Spanish utilities that have been ordered within the past four years alone. As such, our G70ME-GI engine has become a popular choice for LNG carriers globally. This can be attributed in great part to the ME-GI’s embracing of the Diesel principle, which is simply the most effective method of converting gas fuel to propulsion power.” 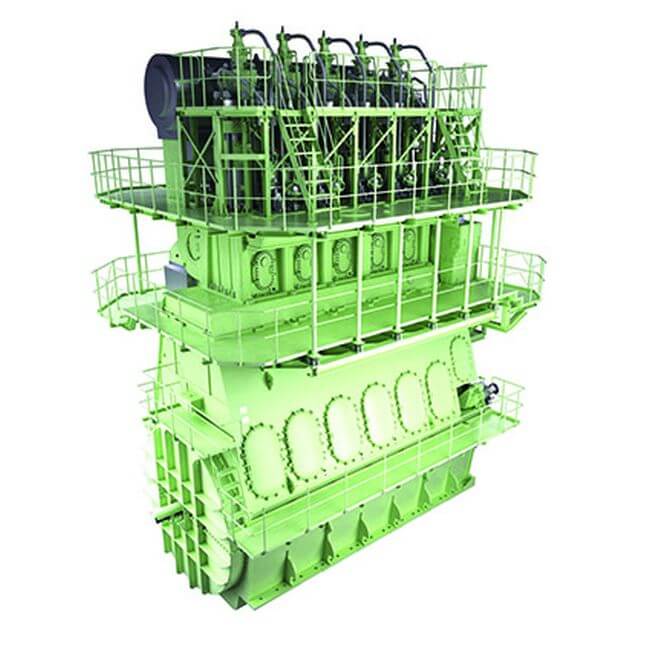 The new orders stem from Corpus Christi Liquefaction, LLC – a subsidiary of Cheniere Energy, Inc. (NYSE MKT: LNG) – that recently entered into 20-year LNG sale and purchase agreements (SPAs) with the two Spanish utilities. Under the terms of their respective SPAs, the Spanish utilities have agreed to purchase a combined total of over 1 million tonnes per annum of LNG upon the commencement of operations from the LNG export facility currently being developed near Corpus Christi, Texas.

The ME-GI dual-fuel low-speed diesel engine represents the culmination of many years of development work. Depending on relative price and availability, as well as environmental considerations, the ME-GI engine gives shipowners and operators the option of using either HFO or gas – predominantly natural gas.

The ME-GI is a Diesel engine in contrast to the other dual- or triple-fuel engines on the market, which are Otto engines. Simply put, engines that operate according to the Diesel principle have a higher efficiency and power concentration than those following the Otto principle.

In May 2017, an ME-GIE variant passed operational tests running on ethane, while an ME-LGI counterpart to the ME-GI that runs on LPG, methanol and other liquid gasses has also successfully been introduced to the market.