A major step in the Eco Flettner project has been completed as the rotor has been safely craned onto the forecastle of the vessel Fehn Pollux and secured on its foundation. In next step, cables and wirings between the rotor and the control console have to be connected and the Eco Flettner has to perform first test drives.

The forecastle was strengthened, new wiring was laid and the control console for the rotor was installed at the bridge.“ This state-of-the-art piece of equipment will monitor and manage the prototype sail propulsion system fully automatically. 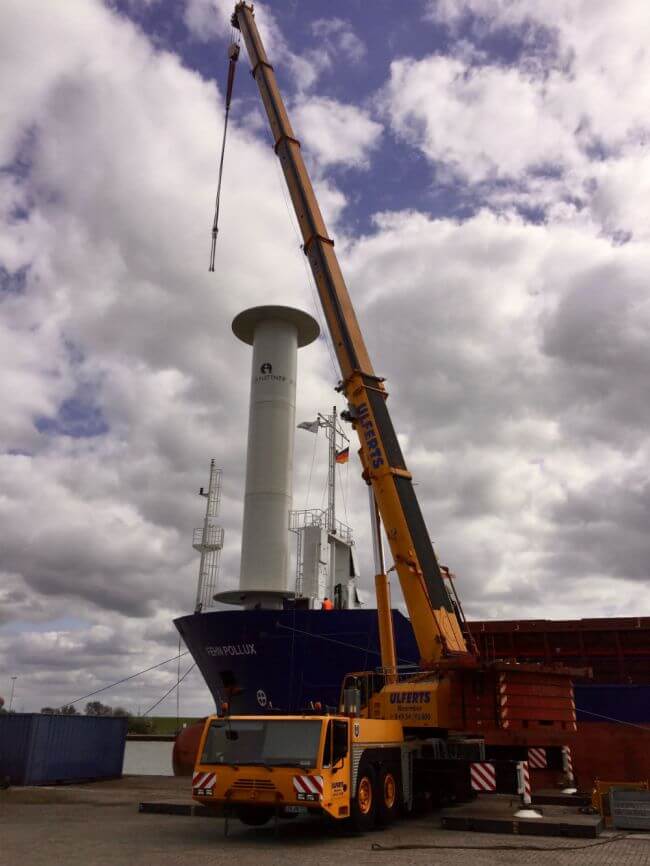 Meanwhile, the crew has finished a handling training at the Faculty of Maritime Sciences in Leer. With the Flettner rotor on the forecastle, the vessel’s manoeuvring characteristics will change. Scientists of the faculty generated a computerised twin of the 90 m long vessel, which allows sailing the Flettner-equipped vessel in the ship handling simulator of the Leer-based company Nautitec.

If all goes according to plan, the vessel will leave the port of Leer end of next week. After a test at sea, she will return to her normal routine as merchant vessel and sail between ports in the Mediterranean, the Black Sea, Northern Europe and the Baltic.

During the next twelve months scientists of the University for Applied Science Emden/Leer will evaluate the eﬃciency of the additional propulsion system under real conditions. The consortium, which initiated and built the 18 m high cylindric rotor, is convinced that the test will show that Eco Flettner is able to fulfil its purpose and save fuel.

ABB’s Azipod D Electric Propulsion Named Innovation of the Year
Want to share your tips and advice? Got questions? Visit the community forum to ask questions, get answers, meet people, and share your tips!