While on her maiden voyage, the “Munich Maersk” berthed at EUROGATE Container Terminal Hamburg on 5 August. With a nominal capacity of 20,568 TEU (twenty-foot equivalent unit) the container vessel is one of the largest in the world.

The megaship belongs to the second generation of Maersk Line’s well-known Triple-E class and calls Hamburg as part of the AE5 service of the 2M alliance, which connects European harbours with ports in Far East. The “Munich Maersk” was delivered to the carrier in June. 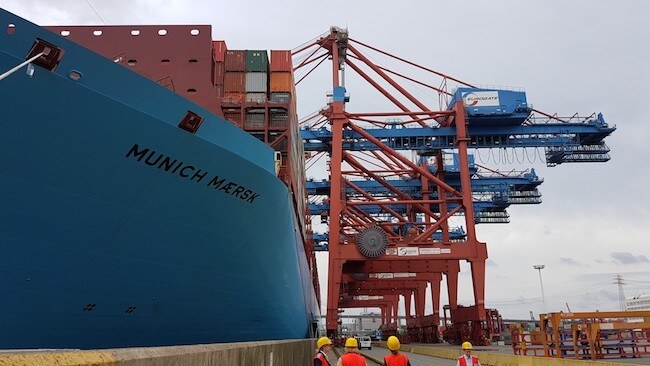 “Hamburg is an important location for Maersk Line and the maiden call of Munich Maersk is a great opportunity to celebrate our good cooperation with the city and the port,” says Jens-Ole Krenzien, Vice President North West Continent. “As the latest addition to our modern fleet, this new vessel emphasizes our continued commitment to serve our customers in Germany and around the world in an efficient, environmentally-friendly and reliable way.”

The “Munich Maersk” is part of a series of eleven container ships, which will be delivered until end of 2018. The ships of the second generation of the innovative Triple-E class are setting new standards in container shipping and will replace smaller, less efficient ships on the East-West-trade.