The Madrid Maersk, the latest in a long line of record-breaking container ships, arrived on 6 June 2017 at the Port of Felixstowe’s newest quay, its first port of call in Northern Europe on its maiden voyage. As the world’s current biggest container ship (weighing in at 214,286 tonnes, and a massive 399 metres long, with a beam of 58.6m), the Madrid Maersk is expected to set a record for carrying the maximum number of standard-sized containers (TEU) on its return leg to Asia. Harwich Haven Authority Pilots and Svitzer Tug Masters used HR Wallingford’s UK Ship Simulation Centre to train and develop the best methods to handle the ship, and determine the limits of the conditions in which it could enter and leave the port safely.

Neil Glendinning, CEO of Harwich Haven Authority, said: “On 6th June, Harwich Haven Authority Pilots safely conducted the Madrid Maersk on her inaugural visit to the Port of Felixstowe in very challenging environmental conditions. Preparation for the arrival of this first of the second generation Maersk Triple E Class vessel had included detailed feasibility simulation studies at HR Wallingford, which gave our Pilots the confidence to safely handle the largest vessel in operation in such challenging conditions, and to deliver the highest level of service to one of our major customers.“ 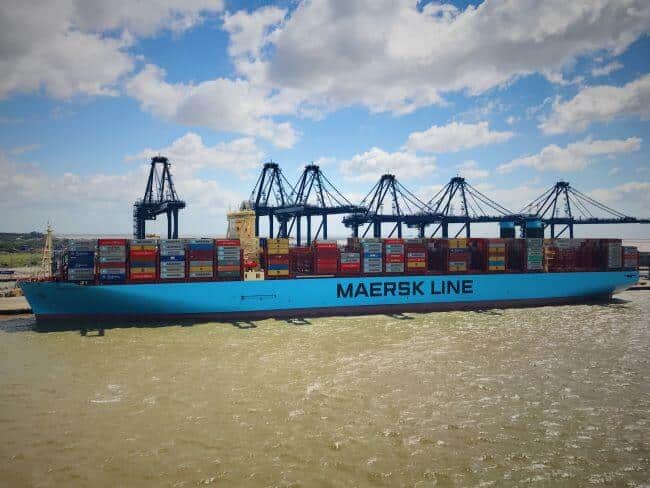 Pilotage on entry into Felixstowe was carried out by Captain Ian Love in adverse weather, with wind speeds of between 28 and 35 knots with occasional gusts above 40 knots, which had been shown to be feasible in the simulator. Initially two Svitzer tugs provided escort towage from the end of the main channel to the harbour where they were joined by a further two Svitzer tugs to conduct harbour towage and safely berth the vessel. Text book transit was achieved with one tug towing indirect and the other pushing indirect, using methods developed and training provided using the simulators.

HR Wallingford used data provided by Maersk to construct an accurate hydrodynamic model of the Madrid Maersk prior to the ship build being completed. Harwich Haven Authority Special Category Ship Pilots carried out familiarisation sessions with the Pilots working alongside Svitzer Tug Masters in integrated tug simulators within HR Wallingford’s UK Ship Simulation Centre in Oxfordshire, to determine how the ship would handle in comparison to other large container ships, and to determine the limits within which the new vessel could be manoeuvred safely. 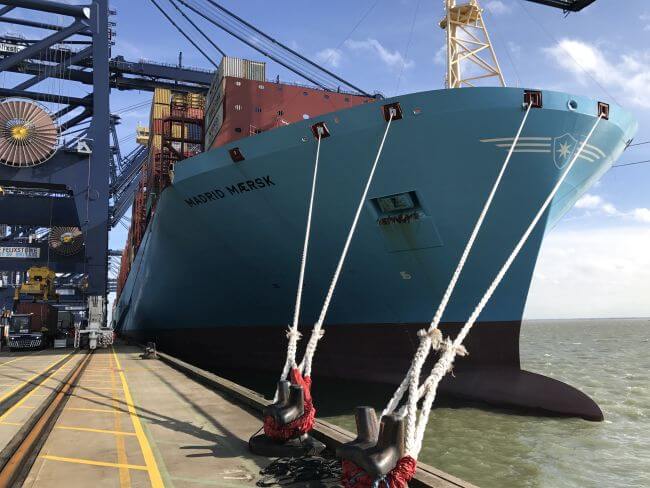 Captain Love commented: “The hydrodynamic forces acting on these mega container vessels are enormous, often peaking at 900 tonnes. For a Pilot, the ability to understand, quantify, and use these forces to their advantage has never been greater. For the Ship Owner and Captain the knowledge that a full and accurate feasibility study has been carried out goes a long way to fulfilling their risk assessment and placing them at ease.”

Dr Mark McBride, HR Wallingford’s Ships Group Manager, said: “The state-of-the-art Ship Simulation Centre at HR Wallingford provides the perfect platform for the Harwich Haven Authority Pilots and Svitzer Tug Masters to carry out feasibility and design studies for the ever increasing size of container ships arriving at the port. We have developed accurate ship manoeuvring models to simulate close quarters operations, with the Pilots and Tug Masters using the integrated ship and tug simulators for their continued training and development. This level of precision enables us to continue to provide the highest level of service to satisfy the demanding requirements of the container ship industry.” 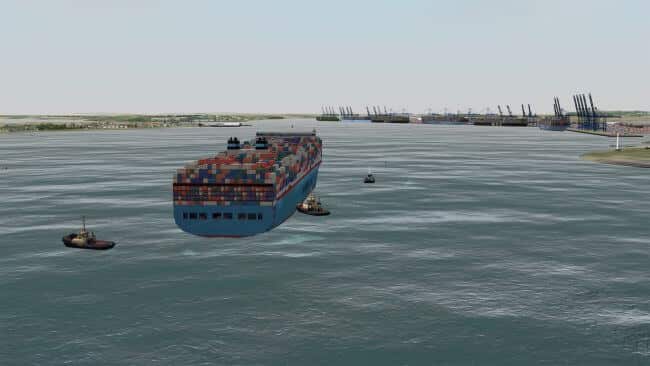 The Madrid Maersk is a Triple-E Mark II, the first of Maersk Line’s 2nd generation Triple-Es. The original Triple-Es have been regular callers at Felixstowe since 2013. Delivery of the remaining 10 Triple-E Mark II’s is expected to take place between now and the middle of 2018.