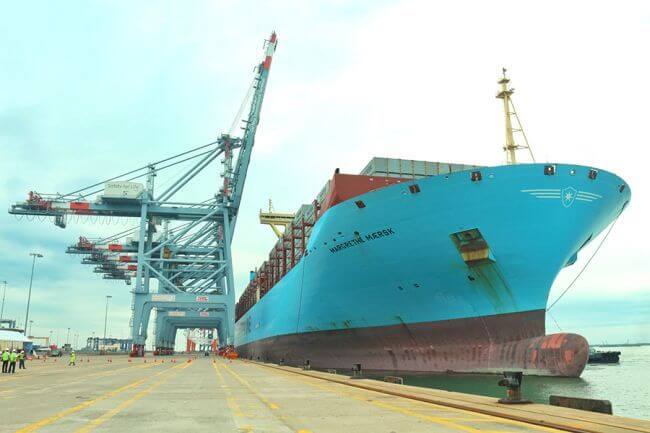 “We believe in the Vietnamese economy and have done so since 1923 when the first Maersk vessel called Vietnam” said Giang Nguyen, Managing Director for Maersk Line Vietnam and Cambodia. “Over the past five years we have seen 8% -10% growth and project that GDP will increase by 6.5%% on average until 2020.”

Trade between Vietnam and North Europe has grown by 35% in five years and represents Vietnam’s second largest long-haul trading partner. The Margrethe Maersk will be discharging cargo from Northern Europe, bound for Vietnam and other Asian countries.

“The success of this port call trial is a testament not only to the strength of the Vietnamese economy, but to the positive steps the government has made in terms of both policy and infrastructure. We applaud the Ministry of Transport, Vung Tau Port and APM Terminals for undertaking the upgrades necessary to accommodate these larger vessels” said Ms. Nguyen.

The Cai Mep International Terminal (CMIT) is a joint venture between Vinalines, Saigon Port and APM Terminals with 36%, 15% and 49% ownership respectively.

“The arrival of the Margrethe Maersk is a major milestone for CMIT and for Vietnam, as it demonstrates that this Terminal can also serve as a regional transhipment hub for Southeast Asian cargoes, particularly destined for the Vietnam/Northern Europe trade lane” noted CMIT Managing Director Robert Hambleton.

Maersk Line makes 13 port calls in Vietnam each week, connecting consumers to goods, businesses to markets and enabling global trade. Through Maersk Line’s network, Vietnam has access to 94 countries around the world.