Maersk Line and the ports of Los Angeles and Long Beach are partnering to measure the environmental benefits of a $125 million upgrade for 12 Maersk container ships. This will involve the installation of high-tech equipment to track vessel emissions and energy efficiency over the next three years, enabling more transparency and ultimately reducing the environmental impact of vessels calling at the San Pedro Bay port complex.

The two ports are contributing a combined $1 million to real-time tracking systems that represent an industry leading application to pinpoint vessel emissions while ships are at sea and at berth. Unprecedented in its scope and scale, the three-year data collection and analysis project, called “The Connected Vessel Programme”, builds on the $125 million Maersk Line has invested in its “radical retrofit” program to reduce fuel consumption and increase the capacity of the vessels that regularly call at the San Pedro Bay ports. 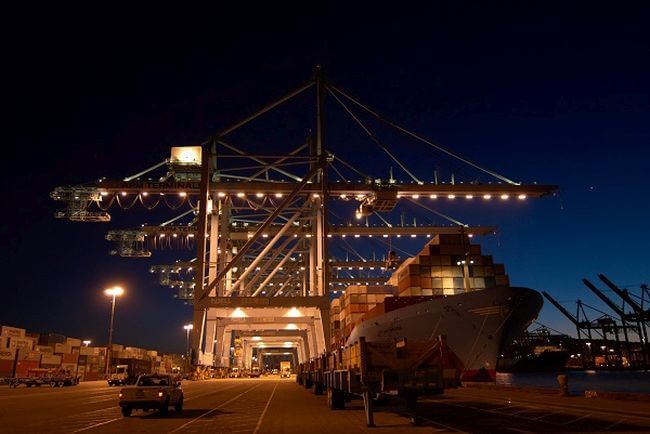 “Maersk Line’s extraordinary commitment to cleaner, more efficient vessel operations represents a quantum leap in the environmental progress of our entire industry,” said Port of Los Angeles Executive Director Gene Seroka. “We applaud Maersk Line for its leadership and innovation, and we are eager to do our part to advance fundamental change that will result in cleaner air for our surrounding communities and around the world.”

“This project is a vivid example of the deep commitment to environmental sustainability that we have grown to expect from our goods movement partners, as we all work together to create a healthier planet,” said Port of Long Beach Interim CEO Duane Kenagy. “We’re pleased to be a part of this project, and we hope it will serve as a model to encourage even more progress and creativity in emissions reductions from ocean-going vessels.”

The project will continuously record how much fuel each engine uses in conjunction with speed, engine power, weather and other operational variables through use of mass flow meters and an interface to the Integrated Control System (ICS) on-board to capture key performance data. Information will be uploaded to Maersk Line servers via satellite, and each ship will be able to communicate in real-time with Maersk Line’s Global Vessel Performance Centre (GVPC) to increase operational efficiency.

“This is the equivalent of strapping a Fitbit onto a large container ship,” said Dr. Lee Kindberg, Director of Environment and Sustainability for Maersk Line,. “We’ll be tracking vessel performance and emissions 24/7. This advances our ability to reduce greenhouse gases and other pollutants on a global scale.”

The ports of Los Angeles and Long Beach will split the $1 million cost under their joint Technology Advancement Program (TAP). TAP is a grant program created under the ports’ landmark Clean Air Action Plan to accelerate the evaluation and demonstration of new and emerging clean technologies for reducing and ultimately eliminating harmful emissions from all port-related sources. Ships generate the lion’s share of air pollution associated with port activity.

Under its “radical retrofit” program, Maersk Line upgraded vessels that already plug into shore power at the San Pedro Bay ports. The additional improvements include redesigning the bulbous bow of each vessel, replacing existing propellers with more efficient models, and “derating” the main engines to make them more efficient at lower speeds.

The retrofit program also involved raising the bridge to increase each ship’s capacity from about 9,500 TEUs (twenty-foot equivalent units) to about 11,000 TEUs. This allows Maersk Line to carry more containers per vessel while decreasing their environmental impact per container moved.

The energy efficiency makeover is expected to decrease each ship’s fuel consumption by more than 10 percent, saving an estimated 10,000 metric tons of fuel on an annual basis. This would reduce greenhouse gas (GHG) emissions by an estimated 31,000 tons of carbon dioxide (CO2) per year and lead to similar reductions of diesel particulate matter (DPM), nitrogen oxides (NOx) and sulfur oxides (SOx). A single ton of CO2 would fill a 1,400-square-foot house.

Since 2007, Maersk Line has reduced GHG emissions associated with its vessel operations by 42 percent on a per container, per kilometer basis. The Retrofits and TAP demonstration project with the San Pedro Bay ports will help Maersk Line reach its goal of a 60 percent reduction of CO2 and other pollutants by 2020.

Both the Port of Los Angeles and the Port of Long Beach continue to pursue aggressive clean air programs with the goal of eliminating all harmful emissions from port-related sources. Over the last decade, DPM emissions have declined as much as 85 percent, NOx emissions have been cut in half, SOx emissions have plummeted 97 percent, and GHG emissions are down an average of 12 percent, based on the latest annual inventories that measure the impact of the San Pedro Bay ports’ pollution-reducing strategies.