Background: On 6 March 2018 while en route in the Arabian Sea towards Suez, a major fire occurred in the cargo hold no. 3 on our vessel Maersk Honam. The crew engaged in firefighting which included releasing the vessels’ CO2 system into the cargo hold. Regrettably, that did not stop the fire eventually resulting in five crew members tragically losing their lives.

The vessel suffered extensive structural damage in the accommodation block and forepart of the vessel and was towed to Jebel Ali during the salvage operation. Subsequently, the vessel was rebuilt in Korea before returning to operation in August 2019 under the name Maersk Halifax. 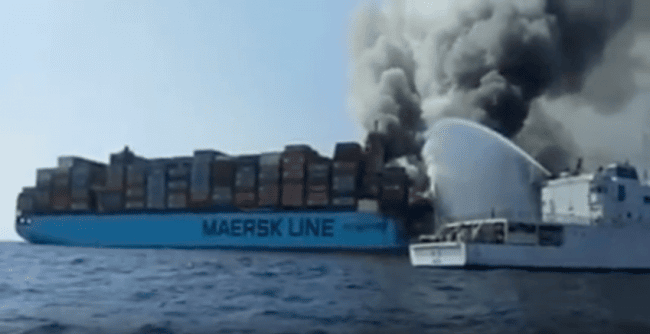 The magnitude of the incident prompted a detailed investigation by The Transport Safety Investigation Bureau (TSIB) in addition to Maersk’s own comprehensive investigation into the incident and subsequent initiatives to improve fire safety across the Maersk fleet above international requirements.

Maersk Honam was delivered from the yard to Maersk in July 2017, flying the Singaporean flag.

The safety and well-being of our people will always be first for A.P. Moller – Maersk and the tragic fire on the Maersk Honam prompted extensive efforts to avoid similar incidents, among other initiatives introducing new guidelines for stowing dangerous goods on our vessels. In this relation, we have been awaiting the conclusion of the investigation by the Transport Safety Investigation Bureau (TSIB) of Singapore to further understand how fire safety can be improved across our own fleet and more broadly in the industry.

The investigation identified that the most likely source of the fire is to be found amongst a block of 54 containers with IMO Class 9 Dangerous Cargo stowed inside cargo hold no. 3 in the forepart of the vessel. According to the report, the cause of the fire is not conclusive, but highly likely to originate from the decomposition of dangerous cargo generating intense heat, enabling the fire to rapidly develop out of control.

“We appreciate the thoroughness of the investigation in identifying opportunities to further improve our emergency response towards ship fires. We also appreciate TSIB’s recognition of the preventive measures taken by the A.P. Moller – Maersk and that TSIB is recognizing the need to review legislation linked with the safe transport of Dangerous Cargo. The main safety recommendations in the report we have already implemented across the fleet over the past two years and we will be studying the report further to understand how to best make use of the recommendations going forward,” says Aslak Ross, Head of Marine Standards at A.P. Moller – Maersk.

“This was one of the most serious incidents in the history of A.P. Moller – Maersk and we are devastated that five colleagues lost their lives and that five families lost their loved ones. The magnitude and intensity of this fire made it impossible for any crew to successfully contain, making it key that we as an industry take steps to address the root cause to ensure seafarers never find themselves in a similar situation. We hope this investigation will initiate a more holistic, industry-wide approach where we address the concerns regarding containerized dangerous goods across the entire supply chain – starting at the manufacturing level and following through until the box has been safely delivered at destination to the customer,” says Palle Laursen, Chief Technical Officer, A.P. Moller – Maersk.