You are here: Home › Shipping News › Maersk And Hamburg Sud Are The Most Reliable Container Shipping Carriers – Drewry
TwitterFacebookLinkedInPinterestBuffer

Maersk Line and Hamburg Sud are ranked as the two most reliable container shipping carriers, according to performance rankings published in the new online version of the Carrier Performance Insight(cpi.drewry.co.uk) published by shipping consultancy Drewry.

Maersk Line and Hamburg Süd were by far the most reliable carriers in the three months to October 2014 with overall on-time performances of 80.4% and 78.5% respectively. The next best performing carrier was Cosco at 69.9%, with its CKYHE Alliance partners, Evergreen, K Line, Hanjin Shipping and Yang Ming, not too far behind in that order.

Industry-wide containership reliability improved gradually in the three month period to October. The latest data shows that aggregate on-time performance for the Asia-Europe, Transpacific and Transatlantic trades improved to 64% in October, up from 63% in September and 55% in August.

“It is a positive to see reliability improving, but the industry’s on-time performance is still unacceptably low for many shippers,” said Simon Heaney, senior manager of supply chain research at Drewry. 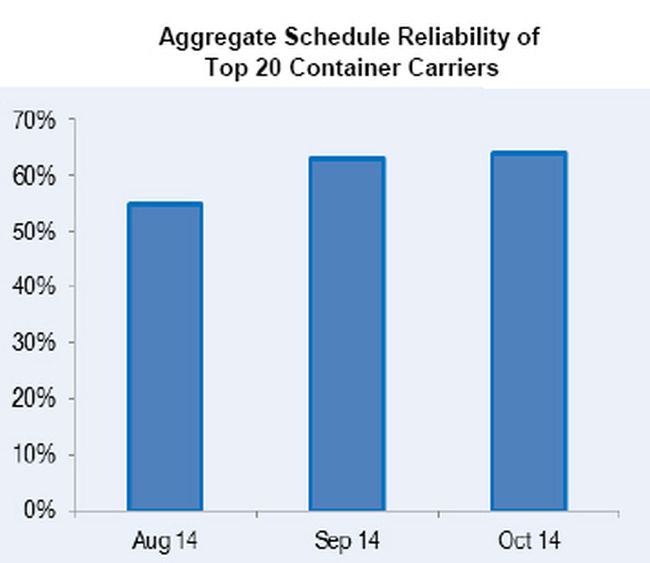 Despite the steady monthly improvement, the rolling three-month performance (August-October) was lower than for the previous three months at 60.6% versus 61.1%. The average deviation between the scheduled day of arrival (ETA) and actual day of arrival (ATA) remained at 1.1 day for the same period.

The Asia-Europe trade was the least reliable during August-October with only 58% of ships arriving on-time, compared to 62% in the Transpacific and 77% in the Transatlantic.

Looking ahead, the recent drop in fuel prices could have some positive influence on reliability. Heaney elaborated: “Lower fuel costs won’t immediately see containerships running at their design speeds. But at the very least carriers should now be more willing to speed up if they fall behind schedule.”