Lockheed Martin has been awarded the first contract for a quartet of frigates the company is building as part of a $20 billion foreign military sales package to Saudi Arabia, USNI News has learned.

Last week, the company was awarded a $22.74 million Pentagon contract to modify the design of the existing Freedom-class Littoral Combat Ship class for a more heavily armed, “Multi-mission Surface Combatant.” 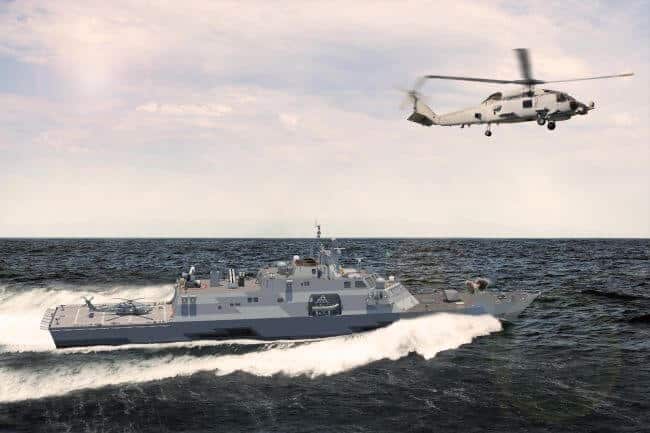 The new frigates will the centerpiece of the long-awaited Saudi Naval Expansion Program II. SNEP II is set to modernize the Royal Saudi Navy’s Eastern Fleet as part of a wide-ranging estimated $20 billion arms package.

“These vessels will replace aging U.S.-built ships, and represent a generational upgrade to Saudi naval capabilities and will mark the first major export of a newly built U.S.-manufactured surface naval vessel in years,” read a statement from the U.S. State Department provided to USNI News.

The frigates will be built at Marinette Marine in Wisconsin at an estimated cost of about $6 billion, the largest line item of the $20 billion SNEP-II deal. The package will also modernize the frigate’s planned homeport at the King Abdul-Aziz Naval Base on the Persian Gulf.

“We look forward to supporting the United States Navy in delivering the first U.S.-built surface combatant to a foreign partner nation in more than three decades,” Lockheed Martin said in a statement to USNI News.

“This is a major endorsement of the quality and the capabilities of the United States Navy and Lockheed Martin’s Freedom-variant surface combatant.”

The new Saudi ships will be built around an eight-cell Mk-41 vertical launch system and a 4D air search radar. The deal also includes 532 Raytheon RIM-162 Evolved SeaSparrow Missiles (ESSM) which can be loaded four to a Mk 41 cell. With 16 cells per hull, the Saudi Freedoms will be able to potentially field 64 anti-air missiles per-ship.

At about 4,000-tons, the frigate can field a crew of 100 to 130. It runs on a power plant of two Rolls Royce MT-30 gas turbines and two Colt-Pielstick diesel engines. The ship will field eight RGM-84 Harpoon Block II anti-ship missiles (ASM), anti-submarine warfare (ASW) sonar suites, and torpedoes.

The FMS case was announced in 2015 after years of negotiating between the U.S., the Saudi government and the several defense contractors.

The following is the complete Nov. 22, 2017 contract statement from the Department of Defense.

Lockheed Martin Corp., Baltimore, Maryland, is being awarded a $22,748,516 cost-plus-fixed-fee modification to a previously awarded contract (N00024-11-C-2300) to exercise an option for class services in support of foreign military sales for the Littoral Combat Ship program. Work will be performed in Hampton, Virginia (41 percent); Moorestown, New Jersey (38 percent); and Washington, District of Columbia (21 percent), and is expected to be completed by July 2018. Foreign military sales funds for the Kingdom of Saudi Arabia in the amount of $22,748,516 will be obligated at time of award and will not expire at the end of the current fiscal year. The Naval Sea Systems Command, Washington, District of Columbia, is the contracting activity.