A Jensen Maritime -designed, liquefied natural gas (LNG)-bunkering articulated tug-barge (ATB) has been granted “approval in principle” by classification society American Bureau of Shipping (ABS). The designation establishes that Jensen’s vessel concept, which is classed as an A1 Liquefied Gas Tank Barge, is compliant in principle with ABS rules and guides.

Ideal for mobile bunkering, Jensen’s ATB is also oceans rated, meaning that it is not limited to the intracoastal waterways, like many other similar types of LNG ATBs. This flexible design feature allows the vessel to facilitate the transfer and use of small-scale LNG in places with limited infrastructure, including offshore locations.

The ATB will be built with four 1,000- m3 Type C LNG tanks (seven bar working pressure), enough LNG to fill up a large containership twice before having to replenish its own supply. This capacity, combined with flexible operational areas, makes it an ideal solution for a customer who has significant LNG needs at one or more ports not located near an LNG terminal. 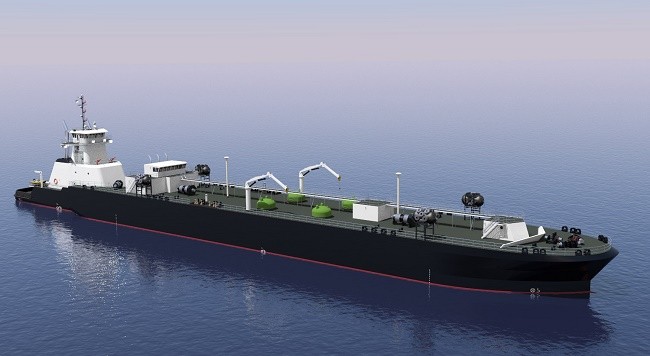 “This vessel is exciting for so many reasons, but perhaps most notably because it offers a solution for the maritime industry, which struggles with whether to develop LNG infrastructure or vessels first,” said Jensen’s Johan Sperling, vice president. “This unique concept offers customers an economical alternative to sourcing LNG terminals or trucking LNG to multiple ports. Additionally, the design was developed using Jensen’s proprietary production engineering capabilities, which makes the construction and assembly more efficient. It’s an incredible package.”

Safety features include a double hull, designed to help to protect the ATB’s 4,000-gallon fuel tank, and firefighting capabilities. Classed as a firefighting vessel (FFV-1), the vessel is well equipped to handle emergencies on board and can satisfy most requirements to have at least one FFV-classed tug escorting LNG tankers into port. Finally, because there is no linkage between the tug and barge, the two can disconnect quickly in the event of emergency.

Expected time to build the ATB is between 18 to 30 months.