“I’m not a great lover of freezing cold weather”, says Sven Lindblad, the president and CEO of Lindblad Expeditions, and an expert in polar travels. Then he adds: “Unless it’s beautiful – then I love it!”

That’s what’s so special about Sven Lindblad and Lindblad Expeditions, Sven will only take you to the most beautiful places. He’s no fan of sending travellers to the North Pole – just for having it ticked off the bucket list.

“Above a certain latitude, it’s boring, there is nothing there anymore. I’m not interested in bringing people there”. 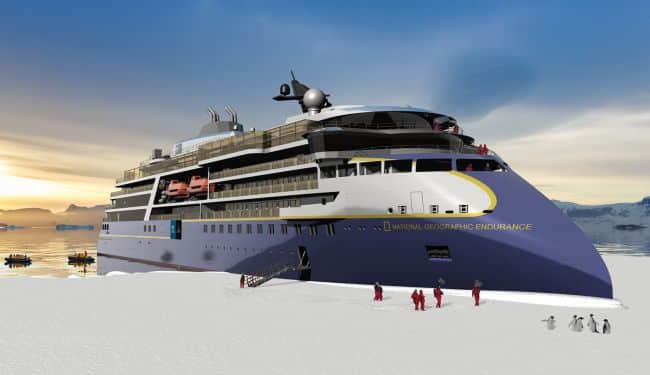 Sven is Swiss-born, raised in the U.S. but with Swedish origins.

“Many summer holidays were spent in Sweden, and he lived there for a couple of years aged 14 to 16 and attended Swedish schools. Travelling has always been a part of his life. Sven’s father started up a travel company back in 1958 and was the first to send a tourist expedition to Antarctica in 1966. Sven has also travelled on numerous of his father’s expeditions. Aged 18, Sven got into bad trouble, after having written a very angry, political term paper at college in Washington.

“My father wanted me to get out of the country! He arranged a summer job for me in Uganda and later organised a job offer in Kenya. I spent 7 years in Africa, and those years developed my values. I met wonderful people there and experienced the wild, the huge grass plains, and endless spaces. It gave me a great sense of freedom, and it was a magnificent education.

“One day my father visited my camp and asked if I would come home to work for him. I didn’t want to leave Africa, and I certainly didn’t want to work in the travel business, but my father was – and is – one of my heroes, so I went home. But I was restless. After a couple of years in his company, I decided to set up my own. Naturally, I started with Africa expeditions, going to the places I knew so well.”

Sven’s expeditions are marine based, he uses small ships to explore deeper and farther into the untouched. Today, he specialises in the polar areas. That’s a long way from the safaris in warm Kenya.

“My involvement in ships is rooted in my time in Africa. The vast oceans give me the same great sense of freedom as the huge plains did. The way I run ships is the same way as I used to run safaris. Both are driven by the same desire, to discover, learn and understand. On a vessel, you are not bound by physical structures, and we go to different places, adapting the travels to seasonal changes.”

Lindblad Expeditions has ordered their first polar newbuilds at Ulstein Verft in Norway. The first, ‘National Geographic Endurance’ is named after Ernest Shackleton’s ship, ‘Endurance’. Shackleton is another of Sven’s heroes. In 1916, after Shackleton and his crew had been trapped in the Antarctic pack ice for more than a year, Shackleton took five of his strongest crew members to seek help. After 16 days crossing the ocean in a small boat, Shackleton and two of his men marched 51 kilometres to a whaling station and found help. All crew members were rescued.

The new ‘Endurance’ offers much space for passengers. The vessel measures 124.4 metres and has accommodation for only 126 guests.

“On a per-cabin basis this is probably the most expensive passenger ship ever built”, says Sven with a big laugh.

“You get an economy of scale with larger vessels, but our company has a unique perspective. We’ve come to the conclusion that smaller is definitely better.”

The ‘Endurance’ is optimized for low impact on nature and for the right number of people to give them the expedition of their lives.

“With more guests, you will compromise the experience,” states Sven.

Lindblad has for years been teamed up with National Geographic. “When I grew up, our source of information to the distant parts of the world were the National Geographic magazines,” says Sven. Their scientific approach and their great photographs have always appealed to him. “It is completely clear that climate change is the biggest problem man has ever created. The only way to get out of this mess, which our children and grandchildren will have to face, is to acknowledge the issue and put it to the forefront of our concerns. By taking people to the polar regions, they see icebergs taller than buildings, they meet scientists and specialists, and they develop an emotional connection to the issue. A lot of influential people travel on these ships, and I’ve seen consequences in various ways.” One of the results is the fund set up by National Geographic and Lindblad Expeditions, to which previous passengers have donated $15 million to improve the health and viability of the world’s oceans.

Through his travels, Sven has seen how nature is impacted by marine pollution, and he is very active in protecting large marine areas. Throughout the Lindblad fleet, all single-use plastic has been eliminated a long time ago, including plastic bottles, and they are now working together with their supply chain to eliminate plastic in packaging.

Another means to reduce the environmental impact of the ‘Endurance’, is the waste heat recovery system. Propulsion and machinery solutions are also carefully planned. 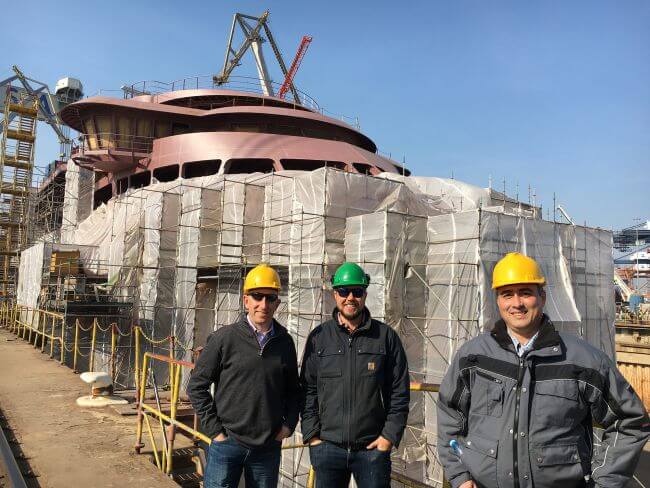 The diesel-electric solution is “among the most environmentally friendly diesel engines that exist”, according to Lindblad Expeditions’ Senior Vice President – New Building, Nikos Doulis.

In order to avoid disturbing the wildlife, the propulsion system is further equipped with Silent E notation to reduce noise to a minimum.

Then comes the X-BOW®, a patented design solution which combines speed with comfort.

“We were intrigued with the technology of the X-BOW®. That was our primary consideration.”

Sven Lindblad, CEO and president Lindblad Expeditions
“The X-BOW® hull was originally created for offshore supply vessels in the North Sea with the goal of maintaining speed and comfort in some of the world’ s wildest seas,” as Lindblad Expeditions’ captain, Leif Skog, explains it. A smoother ride leads to reduced fuel consumption. Also, the unobstructed view enables optimal wildlife observation. The design enables forward and straight down the sides viewing.

Contracted for design and construction

“One of our engineers uncovered the X-BOW® solution at some conference, came back and talked about it, and urged us to consider this solution,” says Sven. Lindblad representatives met up with an Ulstein team, and not long after, the ship construction contract was signed with Ulstein. Ulstein is not only constructing the vessel but is also a ship designer and the inventor of the X-BOW®.

“Were intrigued by the technology of the X-BOW®”

“We are always looking for new places to go, and with this vessel, Ulstein allows us to go to places we have not been able to go before. At delivery, this vessel will have the highest ice class (PC5, Category A) of any purpose-built passenger vessel. This allows us to spend more time in polar regions. One of our planned itineraries will be a 33-day Antarctica voyage from Ushuaia in South America to New Zealand, which we can do due to this vessel’s ice-displacing capacity. “

”There is a strong and deep shipbuilding tradition in Norway, but I certainly didn’t choose Ulstein because of their construction price,” says Sven, again laughing.

“We were intrigued with the technology of the X-BOW®. That was our primary consideration.”

“We looked at many different yards, with a perspective on technology and pricing. We found that people at Ulstein are straightforward. These are people we could trust. They handle complexity and are flexible, which is valuable to us, who are building polar ships for the first time. Combining all the things that we care about, Ulstein was the best choice. I have a comfort level about building a vessel like this in a place like that. It allows us all to sleep well at night.”