As the International Maritime Organization works to reduce greenhouse gas emissions from international shipping, technical measures to limit engine power are among the ideas being considered to reduce carbon dioxide (CO2) from the existing fleet.

Engine power limitation (EPL) is a semi-permanent, overridable limit on a ship’s maximum power that could reduce fuel use and CO2emissions if it reduces the operational speeds of affected vessels.

This study model the relationship between varying levels of EPL and CO2 emissions based on 2018 real-world ship operations. 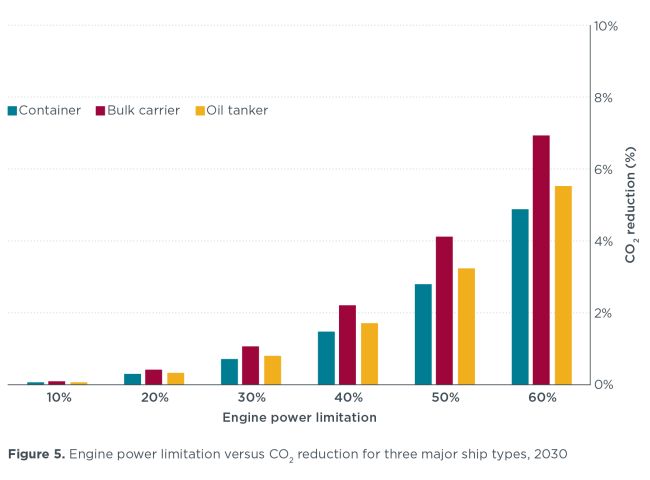 The authors find that CO2 reductions are not proportional to engine power reductions because ships are already operated well below their maximum speeds and therefore engine powers. EPL scenarios below 30% provide negligible cuts in CO2 for the 2018 fleet, while a 30% EPL is estimated to reduce CO2 by 2% for container ships and oil tankers, and 3% for bulk carriers. Larger, 50%+ EPL could more meaningfully reduce ship CO2 by 8%–19% depending on ship type and size.

Additionally and importantly, benefits diminish over time if EPL is not required for newer ships due to fleet turnover and growth. As illustrated in the figure below, by 2030, EPLs of 30% or less would reduce fuel use and CO2 emissions by 1% or less, while the maximum 60% EPL scenario would cut emissions by about 6%. By comparing a Base scenario with a High Speed scenario, the authors find that EPLs of 30%+ in 2030 could help lock in the fuel savings of existing slow steaming practices by constraining future speed increases.