Seafarers continue to face a bleak future in the face of the COVID-19 pandemic, according to the latest Seafarers Happiness Index report, published today by The Mission to Seafarers.

The survey, undertaken with the support of the Shipowners’ Club and Wallem Group, reports on the experiences of seafarers between July and September 2020. This period saw some welcome action to address the dire situation facing the world’s seafarers in the midst of COVID-19, including the ongoing crew change crisis, but still fell short of the comprehensive response that is needed from the international shipping community in the face of the second wave of the pandemic. 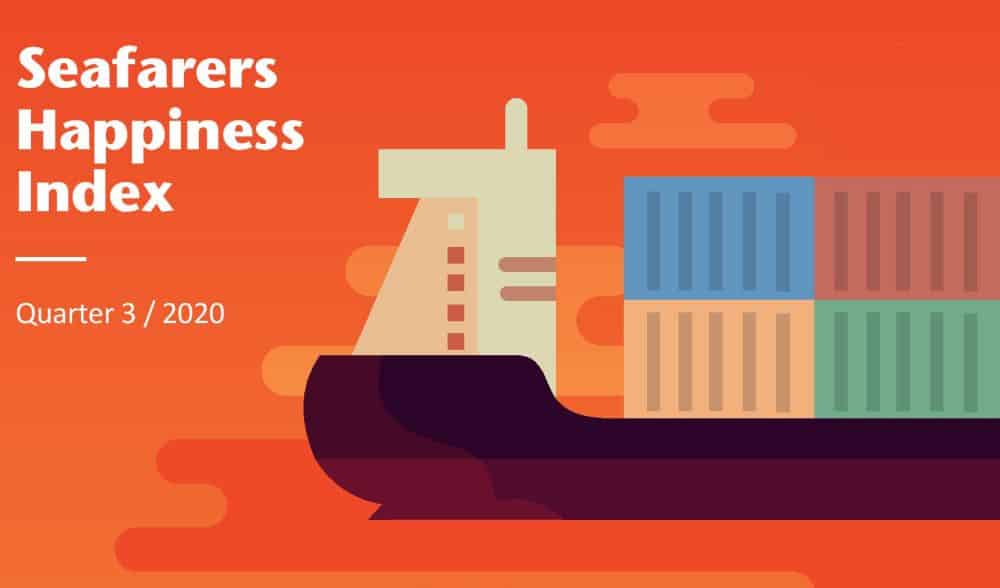 Early hope among seafarers lost as the second wave arrives

The average Seafarers Happiness Index for this three-month period shows an increase in happiness levels from 6.18 to 6.35, compared to the previous quarter. However, this masks significant fluctuations between July and September. Early responses from seafarers were far more positive, driven by rising hopes about the re-opening of national borders and a solution to the crew change crisis.

Unfortunately, as the quarter progresses, this optimism was lost as the second wave of infections put pay to the hopes for many of a return home or a return to work. This was reflected in a decline in happiness levels, with the comment of one seafarer that “life during COVID is hell” capturing the sentiment of many others.

A complex picture emerges in looking at relationships on board during this quarter. There are welcome reports of crew pulling together and a growing sense of unity in the face of the unprecedented challenge they face. Worryingly though, there are also reports of a rise in social conflict onboard, as the social bonds between crewmates come under pressure. The survey also reports some seafarers as feeling that protective measures onboard, including wearing masks and social distancing, risk undermining social cohesion and heightening the sense of isolation.

The findings of the report make it clear that the crew change crisis has not gone away. Seafarers continue to report their dismay and frustration as trips are extended beyond their contractual timeframes and the burden of working 12 hours a day, 7 days a week, continues to take its toll. In addition to the mental strain, seafarers are also expressing concerns over the physical impact of extended contracts, which is exacerbated by reduced crew numbers.

On top of this, some seafarers report feeling trapped between the restrictions placed on their access to shore leave and fears of the exposure risks if they do go ashore.

The survey also reveals the growing impact on the welfare of seafarers who cannot join vessels and are facing severe financial consequences as a result, with careers jeopardized and livelihoods lost. These seafarers have nowhere to turn and report a sense of being the forgotten victims of the crisis. This issue appears particularly acute among those who work in the cruise sector.

In response to this latest survey, Andrew Wright, Secretary-General of The Mission to Seafarers, commented:

“Once again, the Seafarers Happiness Index has revealed the immense human cost of the COVID-19 pandemic among the men and women who serve at sea and upon whom we all depend. It is deeply worrying to learn of the impact on the bonds between crewmates and the damage to social cohesion onboard. All of us who care about our seafarers must act now and act faster to deliver the immediate support and relief that they need, along with a longer-term plan of action; one that meets the needs of those serving at sea and those stranded ashore.

“The Mission to Seafarers is doing all that we can through our global network of ship visitors and seafarer centers, including adapting our facilities to make them ‘COVID-secure’ and developing alternative solutions such as our online ‘chat to a chaplain’ service, but this crisis requires a global response from our industry leaders and national authorities.”

Louise Hall, Director – Loss Prevention at the Shipowners’ Club, emphasized the need for the industry to embrace new ways of meeting the needs of seafarers:

“This latest report highlights the heightened plight of seafarers both ashore and at home. Those on board are feeling increasingly concerned with the ongoing situation with many voicing that they feel physically and emotionally exhausted, whereas those at home are surrounded by the uncertainty of their future employment and financial woes. It is imperative that we work together as an industry to provide new services and tools, such as the online ‘chat to a chaplain’ service, to improve the health and wellbeing of seafarers during these most difficult times.”

Frank Coles, Chief Executive Officer, Wallem Group, in an impassioned response to the findings of the report, commented:

The Seafarers Happiness Index is a barometer of the key issues facing those at sea, conducted every three months. Seafarers are asked ten key questions about their experiences, via an online survey.

Once again, The Mission would like to thank the many hundreds of seafarers, from all ranks, ship types, ages, and nationalities, who contributed to the latest survey.