You are here: Home › Shipping News › Largest Ships Of Hapag-Lloyd To Get New Noses For Lower Emissions
TwitterFacebookLinkedInPinterestBuffer

By 2016, 24 of the largest ships in Hapag-Lloyd’s fleet will get a new bulbous bow, and some will also be fitted with optimised propellers. This will enable the vessels to consume less fuel and produce fewer emissions.

It’s as high as a truck, weighs about 250 tonnes and is a prominent feature at the very tip of the bow of modern container ships. This has little to do with aesthetics and much more to do with fuel efficiency. The bulbous bow – the nose of the ship – displaces water in a manner that mini-mizes or even completely eliminates a bow wave. The lower the water resistance on the hull, the less fuel a ship needs in order to travel at the same speed. If a ship’s fuel consumption decreases, its emissions also drop.

“For this reason, we continuously analyse how to make our ships even more efficient,” explains Richard von Berlepsch, Managing Director Ship Management. As a result, this distinctive part of the vessel is now being retrofitted in four of Hapag-Lloyd’s biggest ship classes. One by one, the 13,200 TEU ships in the “Hamburg Express” class and the 8,750 TEU vessels in the “Colombo Express,” “Prague Express” and “Vienna Express” classes are heading into the docks of two shipyards in Shanghai. The retrofitting of all the vessels should be completed in the coming year. 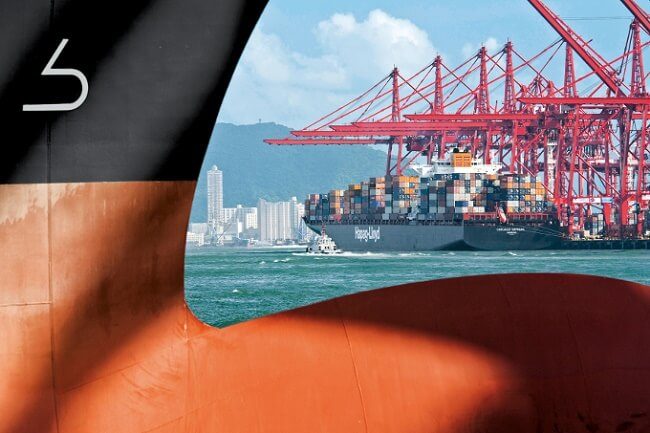 What might sound simple in theory is actually more complicated in practice. If the design of a bulbous bow is really going to save fuel, and thus reduce emissions, it needs to be optimised for the individual performance profile of a ship. Hapag-Lloyd has calculated this profile precisely for the 24 largest ships in its fleet, while taking numerous factors into consideration. These include, for example, the ship’s area of operation and cruising speed. The cargo volume is also important, as it affects the ship’s draft.

Further optimisation potential was even identified for Hapag-Lloyd’s most modern vessels, those in the “Hamburg Express” class, whose last ship entered service just a year ago. The original plans had called for the 13,200 TEU vessels to be smaller in size. “In addition, they were still optimised for an operating speed of 25 knots with a 15-metre draft,” says von Berlepsch. As a result of the subsequent introduction of “slow steaming”, however, the average cruising speed decreased to between 16 and 18 knots. 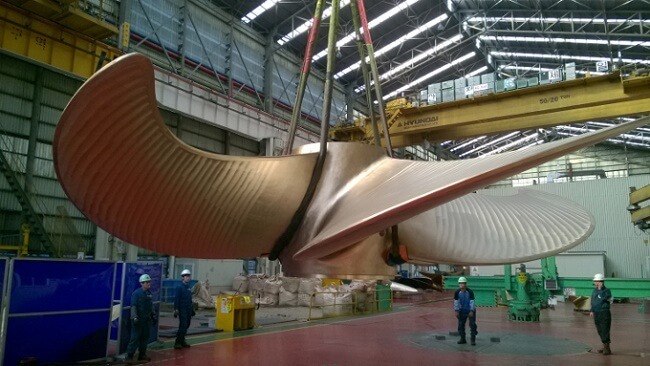 One of the new propellers shortly before its installation at a shipyard in Shanghai- Credits: hapag-lloyd.com

There will also be changes to the stern of ships in the “Hamburg Express” class. In addition to the nose at the bow, the propellers at the rear will be replaced. “The new speed profile allows for further optimisation of the propeller in terms of weight and efficiency, thereby increasing the overall effect,” Richard von Berlepsch explains. With a diameter of 9.20 metres, the new propellers are slightly larger than the old ones (9.00 metres) – but also about 11 tonnes lighter. Furthermore, there are now five instead of just four blades attached to the hub. Together, these changes make the ship’s propulsion more efficient.

Experts at Hapag-Lloyd anticipate that the optimisation measures will lead to fuel savings of roughly 10 per cent for the 13,200 TEU vessels alone. It is conceivable, therefore, that these measures will be extended to other ship classes in the future.