On December 20, the Panama Canal welcomed the largest capacity vessel to-date to transit the Expanded Locks-Hapag-Lloyd’s Valparaiso Express. The 10,589 TEU Neopanamax containership was specifically built to take advantage of the greater capacity offered by the Expanded Panama Canal.

Today’s passage ushers in a new era of mega-ships that are now able to transit the Expanded Canal since it’s inauguration on June 26 of this year. The new locks, which are 70 feet wider and 18 feet deeper than those in the original Canal, are able to accommodate Neopanamax vessels carrying up to 13,000 to 14,000 TEUS. 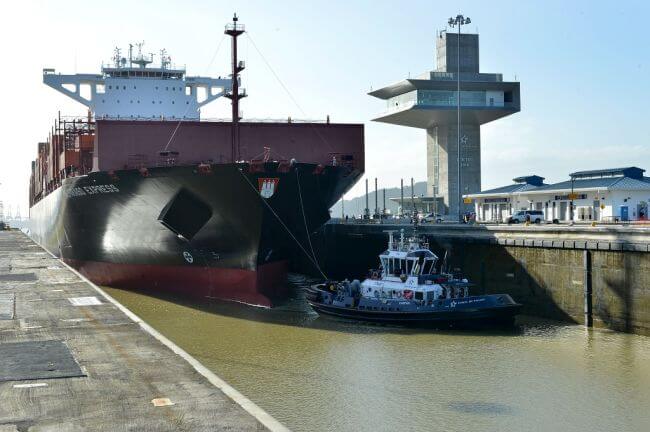 The vessel began its transit at the Pacific-facing Cocoli Locks this morning, following calls at ports in Chile, Peru, Ecuador and Colombia. After completing its transit through the Atlantic-facing Agua Clara Locks, the ship will stop iat Manzanillo International Terminal in Panama and will continue its route to terminals in the Dominican Republic, United Kingdom, Germany, Belgium, France and the Netherlands.

The containership measures 333 meters in length and 48 meters in width, and is the first of five new vessels in Hapag Lloyd’s new 10,500 TEU class which are specifically being built to take advantage of the additional capacity the Expanded Canal affords. When the final four ships are completed in April 2017, all five will be able to transit the Expanded Canal.

In addition to its consideration of the Expanded Canal’s new dimensions, the Valparaiso Express was built with the highest environmental standards in mind.

The vessel was constructed with an environmentally friendly landside shore connection, which allows the auxiliary diesels on board to be switched off while in port. In addition, the vessel features a fuel-efficient 46,530-horsepower main engine with an emissions-reducing valve control, and ballast water treatment units on board in accordance with the new International Ballast Water Management Convention, which purify the ship’s ballast water without the use of harmful chemicals.
Moreover, the technical specifications of this new ship will help reduce large quantities of sulfur oxide (SOx) and nitrogen oxide (NOx) emissions. By using the Panama Canal, the Valparaiso Express reduces more than 8,500 tons of carbon dioxide (CO2) emissions on its roundtrip voyage compared to other conventional routes that the vessel would have to use without the Expanded Locks, making the Panama Canal the most environmentally friendly route.

In recognition of its substantial emissions reductions, the Panama Canal awarded the vessel with its newly established Green Connection Award, an initiative created to recognize Canal customers who demonstrate excellent environmental stewardship, and to encourage others to implement technologies and meet standards that help reduce greenhouse gas emissions.