Krishnapatnam Port Company Limited (KPCL), India’s largest all-weather; deep water port, on the east-coast of India, today announced that it has handled 45 Million MetricTonne(MMT) of cargo in 2017-18 (FY18) thus, achieving a 25% growth over 36.10 MMT handled in the previous fiscal.

The company witnessed a record 88% rise in the number of containers it handled at 4,81,408 TEUs vis-à-vis 2,55,439 TEUs during the last fiscal. Total bulk cargo handled bythe port stood at 37 MMT. 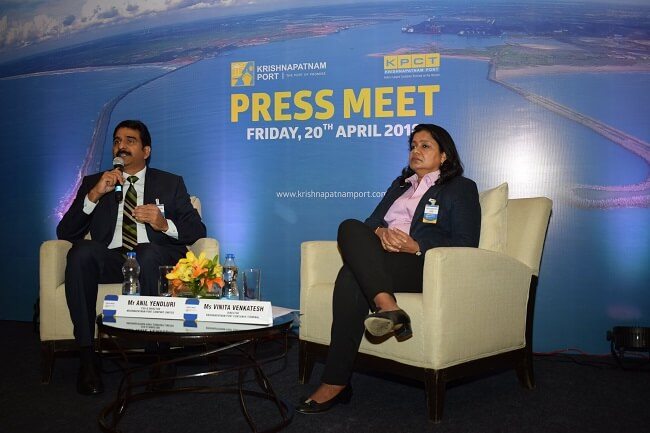 Coal, Iron ore and Granite dominated the cargo portfolio handled at Krishnapatnam Port. It is nowaspiring to achieve an impressive 52 MMT in Bulk and 2 Lakh TEU in Containers this fiscal. The port has planned a total investment of USD 3 billion of which 1.23 billion has already been invested for development till date with second phase ofexpansion underway.

On the occasion, Mr. Anil Yendluri – Director and CEO said, “Favorable government policies and handling of new cargo such as sand, steel products and agri-commodities have added to the growth of our shipments. Cargo in Andhra-Telangana, north and east Karnataka, besides eastern parts of Maharashtra which were earlier going to other ports have witnessed an instant cost advantage availing route optimization, multi-modal connectivity, and competitive pricing aftertheyswitched to Krishnapatnam Port.”

“Our world-class technology driven infrastructure further reiterates our claim to offer the most convenient and trade efficient gatewayon the eastern peripheryofthe country,” he furtheradded.

With government’s push towards solar energy, the port has also witnessed a sharp rise in solar related
shipments. It has successfullyconcluded 13,084 FEUs of solar cargo forthe yearFY17-18

With excellent rail connectivity in the states like Telengana and Bangalore the newconnectivity from Nagpur, Maharashtra beginning this May2018, will offeran additional spurt in shipments.

“The cargo spurt resulted partly from the growth of transshipment volumes at KPCT as the Indian Flag operators like Shreyas Shipping provided transshipment feeder services from KPCT to Kolkata, Haldia, Vizag and Paradeep. Further to provide higher cost benefits to importers and exporters the port is offering doorto door cargo logistics under its newservice ‘Ocean2Door’. The service will soon offeronline cargo bookings too.”

In line with its ambitions to emerge as a coastal cargo hub on the east coast of the country, Krishnapatnam Port Container Terminal (KPCT) has recently set up a dedicated coastal cargo berth to handle the growing coastal cargo traffic and reducing the time loss.

Port Of New York And New Jersey Reports Record Cargo Volumes During First Half Of 2018
Want to share your tips and advice? Got questions? Visit the community forum to ask questions, get answers, meet people, and share your tips!