Norwegian explorer cruise line Hurtigruten and the shipyard Kleven signs a letter of intent for the construction of up to four new explorer ships. The first vessel is to be completed the summer of 2018.

This is the largest investment in Hurtigruten?s more than 120-year history. It is a milestone for us, the Norwegian travel industry and the Norwegian shipyard industry. We are to build the most formidable expedition ships in the world. We are very glad to note that we have both the skills and the facilities to do so here on the Norwegian coast right next to the waters our ships sail every day of the year, says Hurtigruten CEO Daniel Skjeldam.

The agreement visualises Norway’s strong international position as a shipbuilding nation. It will also ensure Hurtigruten’s position as world leading within adventure tourism in the Arctic and in Antarctica. 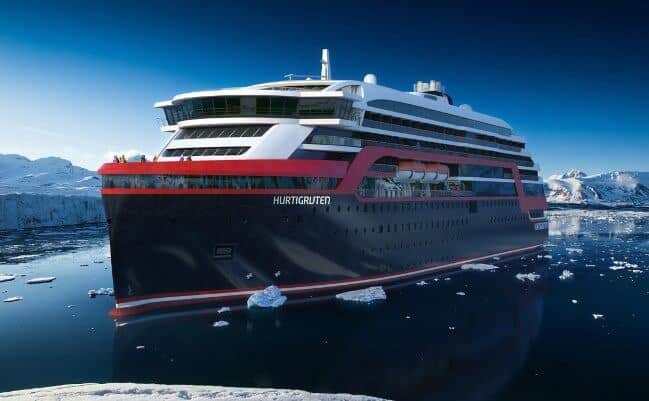 This is one of the largest orders in the history of Kleven. The fact that it is Hurtigruten placing the order, makes the project particularly exciting, says Rasmussen.

It has been more than ten years since Hurtigruten last placed an order for the construction of a new ship, the expedition ship MS Fram. Hurtigruten has evaluated 12 shipyards on a global basis. Previously, three of the ships in the Hurtigruten fleet have been built by Kleven. The last ship built by this shipyard was MS Finnmarken in 2002.

We have evaluated shipyards from an extensive set of criteria where quality, ability to deliver and price was the most important ones. It is particularly gratifying to us that a Norwegian shipyard came out on top. For us, it is important that Hurtigruten once again can contribute to activity and jobs for a proud and longstanding ship building tradition in Norway, says Skjeldam.

The ships are customised for adventure-rich expedition voyages and can also operate on the Norwegian cost. A separate project will examine how to ensure that the ships are in the very forefront when it comes to utilizing new environmental technology, on board and for the propulsion systems.

Hurtigruten has taken a leading role when it comes to green shipping. Sustainability is given top priority and new technology will contribute to reducing emissions, says Skjeldam.

The ships are designed by Rolls-Royce Marine in collaboration with the Norwegian yacht designer, Espen Øino.

These will be innovative expedition ships with advanced environmentally friendly technology that will bring travellers to unique and exclusive destinations. It is very inspiring to us to help materialize Hurtigruten’s ambitious climate ambitions, says Rasmussen.