The naming ceremony of the FPSO, Armada Kraken, was held at Keppel Shipyard yesterday. 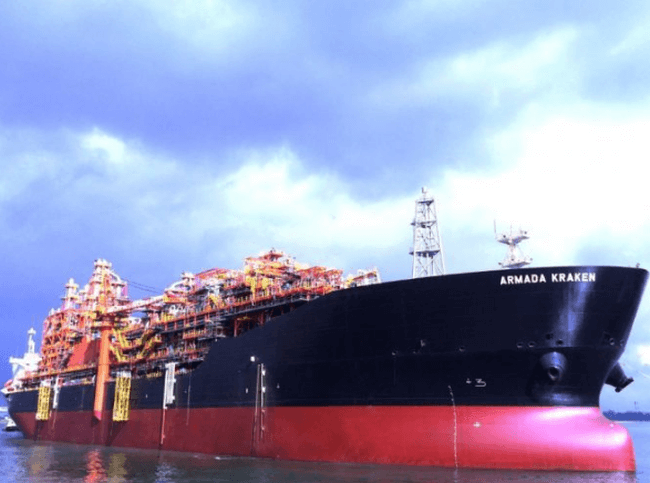 Armada Kraken is a harsh-environment FPSO unit that is designed for operations in the North Sea under a stringent regulatory regime. The FPSO vessel, which has a design life of 25 years without dry-docking, will be deployed to produce the heavy oil (API degree 14) found in the Kraken field in the UK sector of the North Sea.

Mr Michael Chia, Managing Director (Marine & Technology) of Keppel O&M, said, “We are happy to be entrusted by our long-standing client, Bumi Armada, to deliver its first FPSO unit to operate in the North Sea. The Armada Kraken project has further strengthened our track record in converting sophisticated FPSOs that are designed to operate under harsh-environment conditions. With Armada Kraken, Keppel and Bumi Armada would have completed our 15th conversion/upgrading project together.”

Mr Leon Harland, Chief Executive Officer of Bumi Armada, said, “Armada Kraken marks Bumi Armada’s entry into the North Sea and it underscores our commitment to deliver a high quality bespoke FPSO, that is designed to meet the challenges posed by the North Sea’s harsh environment using proven technology, and incorporates a number of unique features to ensure a safe, reliable and economical operation. The FPSO is built in compliance with the strict regulatory guidelines as defined by the UK Health and Safety Executive and Department of Energy & Climate Change regulations and is classed by DNV GL.”

Keppel Shipyard’s work scope for the Armada Kraken project includes refurbishment and life extension works, upgrading of living quarters to accommodate 90 personnel, installation of an internal turret mooring system as well as the installation and integration of topside process modules.