On the stocks “A” of the Baltic Shipbuilding Factory, which is part of the United Shipbuilding Corporation, a ceremony of laying the first production of the atomic icebreaker “Siberia” Project 22220 took place.

Bookmark nuclear-powered icebreaker “Sibir” was timed to the anniversary of the Baltic plant, which on May 26 turned 159 years old.

In the presence of Deputy Prime Minister Dmitry Rogozin, Director General of State Corporation “Rosatom” Sergei Kiriyenko, the president of USC Alexey Rakhmanov, the governor of the Murmansk region Marina Kovtun and other honorary guests of the event laid the first serial icebreaker project 22220, dubbed “Siberia”. Traditionally, the bottom sections of the ship was set BS board with the date of the event. Act signed tab Director General of FSUE “Atomflot” Vyacheslav Ruksha, director of nuclear ships, a branch of the FAA “Russian Maritime Register of Shipping” Vladimir Rozvorsky and General Director of “Baltic Shipbuilding Plant,” Alexey Kadilov.

The presence of high-ranking guests at the ceremony stressed the importance of the project 22220, under which will be built three nuclear-powered icebreaker, designed for the development of Arctic territories. In March this year, pursuant to the decree of the President of Russia set up a special government commission on the development of the Arctic.

“In the Arctic in the 21st century will face the interests of all the great powers, – said Dmitry Rogozin. – Today Russia should independently produce a world sovereignty and to defend itself. And it can be done only by having unique technologies ledokolostroeniya, the nuclear industry. Already much has been done in this direction. We supported Rosatom and USC who were fans of the idea of ​​building this series of icebreakers and defend the principles of mass production. ” 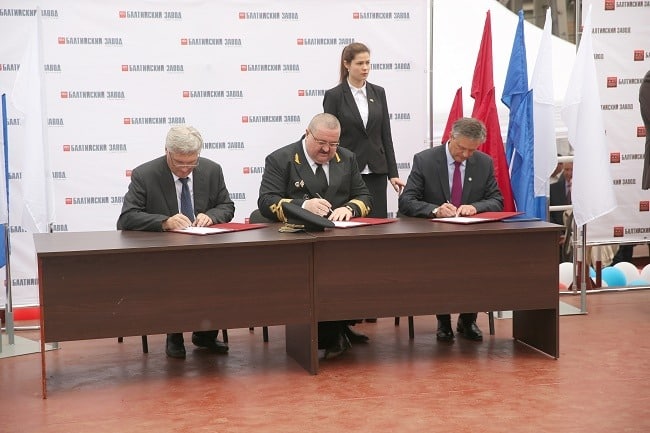 In turn, in his welcome speech, the head of Rosatom Sergey Kiriyenko thanked the United Shipbuilding Corporation (USC) and the Baltic Shipbuilding Plant, for its cooperation and said that joint efforts will help to cope with the important task of the state.

“The President and the Government give priority to the development of shipbuilding industry, including nuclear, because it solves an important defense tasks: ensuring the withdrawal of hydrocarbons from new developing fields on the Arctic shelf, providing navigation for the Northern Sea Route – the most important commercial direction”, – said Sergei Kiriyenko.

A decision on mass production of nuclear icebreakers Project 22220 was taken by the country in difficult financial times. According to the president of USC Alexei Rakhmanov, it shows the power of trust to a corporation.
“We have allocated funds for the construction of a series of nuclear-powered icebreakers – it’s a big responsibility to the major customers, – said Alexey Rakhmanov. – Carrying out modernization of all branch factories of the North-West region and building a series of boats and ships, we will reach a whole new level of performance and quality. This will help to beat a path to Russian natural resources in all the markets that we consider strategic for themselves. And today we take a new step in this direction – a real laid another arctic terrain vehicle. ”

In turn, the general director of the Baltic Shipbuilding Factory Alex Kadilov promised on behalf of all the Balts to build three nuclear-powered project quality and on time, “Baltic sailors will make every effort to build a high quality trial to test together with the time and put the Atomflot icebreakers at the quay wall Murmansk “.

First Steel Cut Event Held For Construction Of Liza FPSO Vessel Project
Want to share your tips and advice? Got questions? Visit the community forum to ask questions, get answers, meet people, and share your tips!