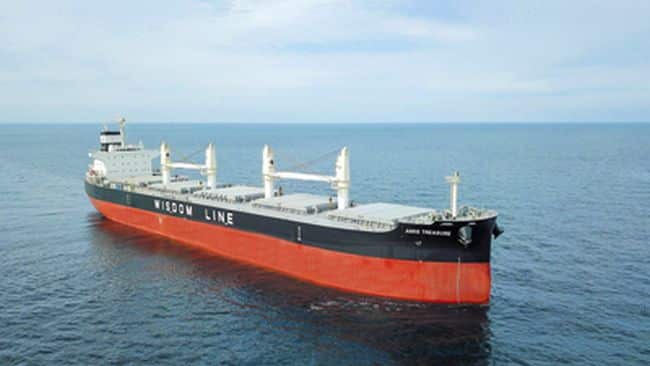 The vessel has a flush deck with a forecastle and five holds that are designed for optimum transport of grains, coal, ores and steel products. Four 30-ton deck cranes are installed along the center in between the hatch covers to enable cargo loading and unloading in ports that lack cargo handling facilities.
The vessel employs various technologies to achieve maximum fuel economy, including an energy-saving, electronically-controlled main diesel engine, a bow designed to reduce wave resistance, high propulsive efficiency propellers, and the Kawasaki rudder bulb system with fins (RBS-F) and semi-duct system with contra fins (SDS-F), which all contribute to the vessel’s enhanced propulsion performance.
The vessel incorporates various energy saving technologies, which reduce both fuel consumption and emission of carbon dioxide (CO2), thereby complying with the EEDI* Phase 2 requirements.

* Energy Efficiency Design Index (EEDI). An amendment to Annex VI of the International Convention for the Prevention of Pollution from Ships (“MARPOL,” one of the IMO treaties), became effective from January 2013, requires new ships to meet energy-efficiency levels based on the EEDI, an indicator of the amount of CO2 (in grams) emitted per metric ton of freight and per nautical mile of transportation. The energy efficiency requirement is tightened incrementally from Phase 0 to Phase 3, with the baseline being determined by the dates that the ship was contracted and/or delivered. By Phase 2, bulk carriers are required to achieve a 20% reduction in CO2 emissions.