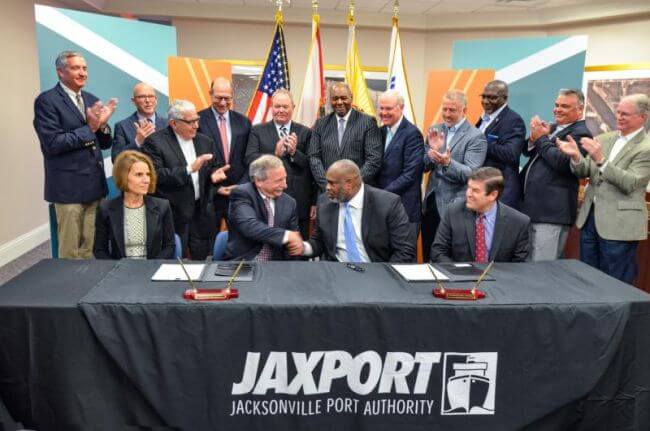 SSA Marine will expand to approximately 80 acres of terminal operating space, with the option to grow up to 120 acres as space becomes available. The facility will offer a vessel turning basin and deepwater access of 47 feet upon completion of the Jacksonville Harbor Deepening project, which is ahead of schedule and expected to be complete in 2023 based on continued funding from all partners. SSA Marine will contribute $28 million for exclusive use of JAXPORT’s three 100-gauge cranes, with those funds going toward the cost of the deepening project.
The agreement is for 25 years with two five-year renewal options and includes a number of improvements to the Blount Island terminal. SSA Marine will contribute up to $129.7 million for the use of the terminal and facility upgrades, including the addition of three new 100-gauge container cranes. JAXPORT will complete $109 million in berth rehabilitation and upgrades which are already underway and will allow the terminal to simultaneously accommodate two post-Panamax vessels.

SSA Marine has been a JAXPORT partner for more than 40 years and currently leases 50 acres at Blount Island. The terminal is estimated to create or protect 3,000 jobs over the first 10 years of the contract.
“We are thrilled to partner with a major international terminal operator that is as dedicated as we are to contributing to the economic vitality of Northeast Florida,” said JAXPORT CEO Eric Green. “The significant investments SSA Marine has committed to this facility, accompanied by their unparalleled industry knowledge and experience, allows us to take full advantage of all of the opportunities the Jacksonville Harbor Deepening project creates for our port and our region.”

“SSA Marine has a longstanding commitment to Jacksonville and we are proud to invest in this community in such a meaningful way,” said SSA Conventional President Mark Knudsen. “The port’s strong leadership team and strategic location in the growing southeast U.S. market—combined with the efficiencies created by a deeper harbor— give us the tools we need to operate a world-class container terminal and further position Jacksonville as a gateway for global trade.”