Japan Petroleum Exploration Co., Ltd. (JAPEX) announced that Soma LNG Terminal located at the No.4 wharf of Soma Port, Shinchi town, Fukushima prefecture commenced its operation today, as one of the important bases in our domestic natural gas supply network. Over 60 years since its establishment, JAPEX has been conducting exploration and production of natural gas domestically and has been supplying natural gas and LNG (liquefied natural gas) to our clients such as local gas distribution companies, business consumers, and fuel for power generation via our domestic natural gas supply network which have been constructed in combination with our gas pipeline network including Niigata-Sendai Gas Pipeline (between Seiro town, Kita-Kambara county, Niigata prefecture to Sendai city, Miyagi prefecture, hereinafter “Niigata-Sendai line”) as the main line, and satellite supply to transport liquid state of LNG by tank trucks and domestic vessels in regions not served by gas pipeline networks.

Aiming to enhance our supply capacity for responding with increase in domestic demands of natural gas in recent years and improve stability with our gas pipeline network between Japan Sea side to Pacific Ocean side, we made the final investment decision on the construction of Soma LNG Terminal and a pipeline connecting the terminal and Niigata-Sendai line in November, 2013(*1). After the start of construction on the terminal in November 2014(*2) and its mechanical completion on the end of November 2017, we have proceeded its commissioning (*3) and required procedures for operational commencement since December 2017. In this time, since we have completed procedures based on the laws and regulations as well as readying for commencement in view of its organization and operation skill training, we commenced operation of the terminal today. 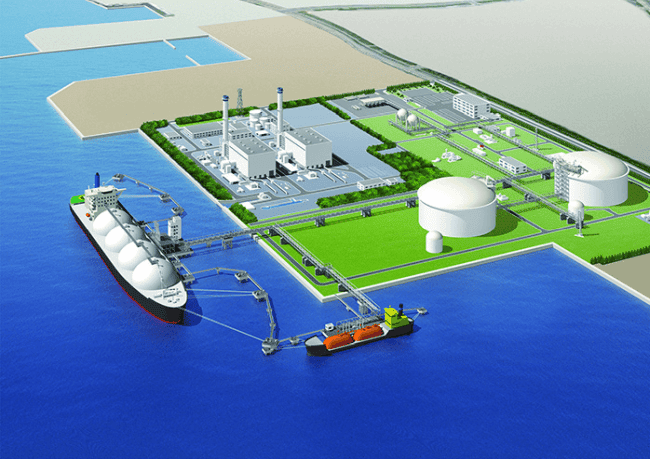 Soma LNG Terminal is a the first large-scale LNG terminal in Fukushima prefecture, which is composed of a ground-type LNG storage tank with a capacity of 230,000 kiloliters which is one of the largest in Japan, two berths for large ocean-going ship of receiving and domestic vessel of receiving and shipping, LNG vaporization equipment, and LNG shipping facility. This terminal will receive LNG from overseas and will supply LNG vaporized gas to Niigata-Sendai line via Soma-Iwanuma Gas Pipeline (from Shinchi town, Soma county, Fukushima prefecture to Iwanuma city, Miyagi Prefecture) which commenced its operation in November 2017 in advance of the terminal, and will be a base of our LNG satellite supply system for mainly wider Tohoku region.

In addition, JAPEX has been awarded by Fukushima Gas Power Co., Ltd. (FGP), which is funded by private companies including us, contract for the management of construction works for the additional LNG storage tank with a capacity of 230,000 kiloliters (hereinafter “No.2 tank”) and additional vaporization equipment in the terminal that made the investment decision by FGP in October, 2016 (*5).

Please refer to the appendix for the outline of Soma LNG Terminal. The Soma LNG Terminal has certified as one of the Reconstruction Promotion Plan based on the Act on Special Zones for Reconstruction in Response to the Great East Japan Earthquake and has been supported for the development of the port area applied the Harbor System for the energy sector by the Japanese government and Fukushima prefecture. Furthermore, the terminal has been regarded as one of the main projects of “the Fukushima Innovation Coast Framework,” promoted by the Japanese government and Fukushima prefecture for developing new regional economics and clusters of industries and activating local community in the coastal region of Fukushima.

JAPEX will further strengthen our domestic natural gas supply business as one of the primal revenue bases by the commencement of Soma LNG terminal. And we are pursuing the transformation to “an integrated Energy Company with a Focus on the Oil and Natural Gas E&P” by business expansion to related fields of natural gas such as participation in the natural gas power generation project at Soma Port conducted by FGP. Moreover, we are aiming to contribute to the revitalization of surrounding region of the terminal through our safety-first operation of the terminal and stable progress of the power generation project.