R&D plan jointly presented by NYK and Oshima Shipbuilding Co. Ltd. was approved by Japan’s Ministry of Land, Infrastructure, Transport and Tourism (MLIT) in its effort to support the introduction of cutting-edge vessels. The selected plan concerns R&D to fuel a post-panamax* bulk carrier with liquefied natural gas (LNG). MLIT’s approval is expected to accelerate the practical application of the plan. 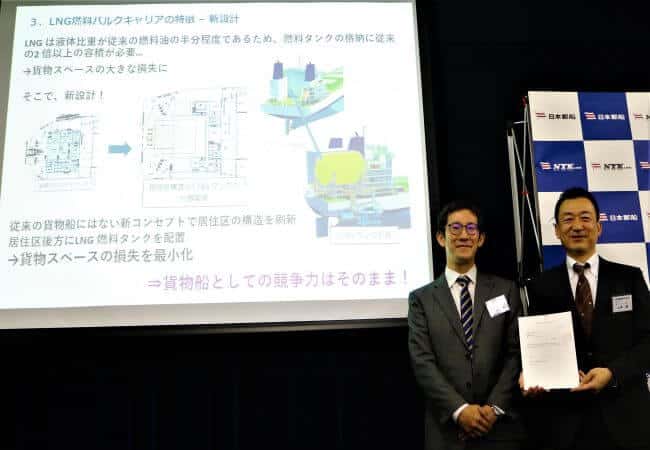 The approval program, which was introduced last October, aims to improve the productivity of Japan’s maritime industry and bolster its global competitiveness by approving plans for R&D, manufacturing, the introduction of vessels using IoT for further safety and efficiency, and the use of eco-friendly fuel for propulsion.

A brief outline of the plan submitted by NYK and Oshima Shipbuilding is provided below.

To date, the NYK Group has promoted the practical use of LNG as an environment-friendly fuel by constructing and operating the world’s first LNG-fueled car carrier and the world’s first purpose-built LNG bunkering vessel, as well as developing an LNG-fuel sales business. Based on its accumulated expertise, the NYK Group will work with its partners to contribute to the use of LNG in the maritime industry for a sustainable society.

* Post-panamax
A ship that is larger than the maximum vessel size (i.e., Panamax) capable of passing through the Panama Canal prior to its expansion in 2016.

** Energy Efficiency Design Index (EEDI)
An indicator for assessment of CO2 emissions per primary unit (ton-mile) based on specifications at the vessel design/construction stage. Calculation of EEDI is mandatory for newly manufactured vessels, and a certificate indicating the EEDI specific to each vessel is issued. The regulations will be strengthened in stages in the future, in 2020 (Phase 2) and 2025 (Phase 3).