The design of these vessels is based on the 3,400 m3 TSHD Alvar Nuñez Cabeça de Vaca and Sebastiano Caboto, built in 2011, and successfully operating since. The vessels combine a shallow draught with high manoeuvrability, making them very suitable for working in confined areas. 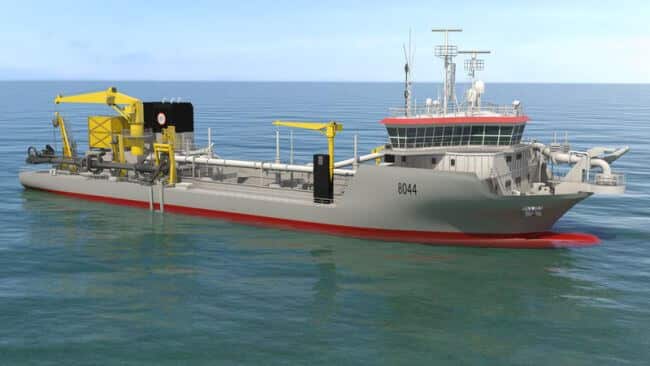 The vessels are in diesel-electric execution: all major drives (thrusters, dredge pump, jet pumps…) are electrically driven, and controlled by means of frequency converters. In this way each system can operate at its optimal speed and power. Power is generated by means of three diesel generator sets; a control system automatically starts and stops the sets depending on the power requirement, and by means of asymmetric load sharing we ensure that the load is optimally distributed over the diesel generator sets. All these measures result in a low fuel oil consumption, which is the best in its class.

Thanks to the low fuel oil consumption emissions are lowered, but in addition the vessels are equipped with exhaust gas treatment systems in order to further reduce harmful emissions.

New vessels need to comply with IMO regulations for NOx emissions. As the new dredgers will frequently operate in estuaries and on rivers, or near the coast, and therefore near residential areas, Jan De Nul Group decided to limit the NOx emissions to a level far below the actual requirements, and to reduce other contaminants that are currently not regulated by IMO.

The new vessels will operate with normally available fuel oil, and the exhaust gases are cleaned by means of a Selective Catalytic Reduction (SCR) system, and a Diesel Particulate Filter (DPF). The SCR system lowers the amount of NOx in the exhaust to a level corresponding with the future European (EU Stage V) requirements for inland waterway vessels; this standard is much more stringent than the applicable IMO Tier II and Tier III requirement.

The DPF removes particulate matter from the exhaust, down to a level in accordance with the future EU Stage V requirement for inland waterway vessels.

Combined with the use of readily available low sulphur fuels, the emissions (NOx, SOx, Particulate Matter, CO and Hydrocarbons) will comply with EU Stage V, and be better than any other vessel or dredger. They will be equivalent or better than these of a dredger using LNG as fuel. But, by using normally available fuels, compared to the limited availability of LNG, these lower emissions are achieved worldwide, and all of the time.

LNG (Liquified Natural Gas, consisting mostly of methane) is being promoted as an environmental-friendly fuel. It has a number of advantages: for the same power less greenhouse gas CO2 is emitted, and emissions of some contaminants such as NOx, SOx, Particulate Matter are lower compared to a diesel engine on fuel oil, without exhaust gas treatment system. However, the same or even better results are achieved by using exhaust gas treatment, and the important environmental and operational downsides of LNG are avoided.

Methane leakages (during production, transport, bunkering, …) and methane slip in the dual fuel engines (gas that is not burned and directly released in the atmosphere) are significant. Methane is a very potent greenhouse gas: over a 100 year period, the effect of methane on global warming is 34 times higher than the same amount of CO2. As a result, most studies conclude that with current technology, LNG as a fuel is not better, and in most cases worse than fuel oil with respect to global warming.

The availability of LNG is poor. In addition, due to space and cost restrictions, LNG dredgers have very limited capacity for LNG, and therefore an autonomy of only about 1 week. In practice, a LNG dredger is only occasionally, and/or in a limited geographical area, capable of operating with LNG. Normal fuel oil will have be used for most of the time or in most of the world, and therefore without any improvement with respect to emissions.