Jan De Nul Group wins the ‘DPC Coastal Port Dredging Project of the Year Award’ for its sustainable approach in port dredging. This award was presented during a ceremony in Amsterdam yesterday evening, organised by IHS Dredging and Port Construction, a leading maritime publication. With these annual awards, DPC is promoting innovation, efficiency and sustainability in the industry. 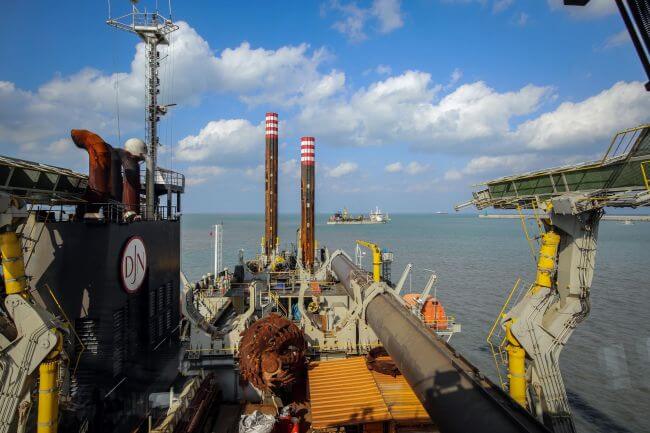 From August 2017 to April 2018, Jan De Nul Group dredged 4 million m³ of mudstone in the Port of Linkou, Taiwan, and re-used the dredged sediments to extend the nearby port of Taipei by means of reclamation. A beautiful example of a circular economy and a win-win for the environment as well as for the client.

In order to be able to dredge and reclaim these quantities within the set period, a cutter suction dredger and a trailing suction hopper dredger worked simultaneously on this project: the cutter pre-cut the hard mudstone after which the hopper dredged the sediments and transported them directly to Taipei Port for reclamation.

Pre-cutting of mudstone with a cutter and subsequent dredging and reclaiming with a hopper on this scale was unprecedented.

This simultaneous working method also required the operations to be perfectly synchronised to enable joint production optimisation, which was vital to execute this huge pre-cut scope efficiently and on time.

Effects of Dredging on the Marine Environment