The ITF (International Transport Workers’ Federation) is pleased to announce that the 17 crew members of the Sea Honest, who were abandoned unpaid and unprovisioned in Algeria in July 2016, have finally returned home.

The last group of five Indian seafarers left the ship last week en route to Mumbai. Another eight seafarers were paid and repatriated on 26 February, following the payment and return home of the two Turkish crew members also last month. Two Indian seafarers have been paid and have opted to remain on board. 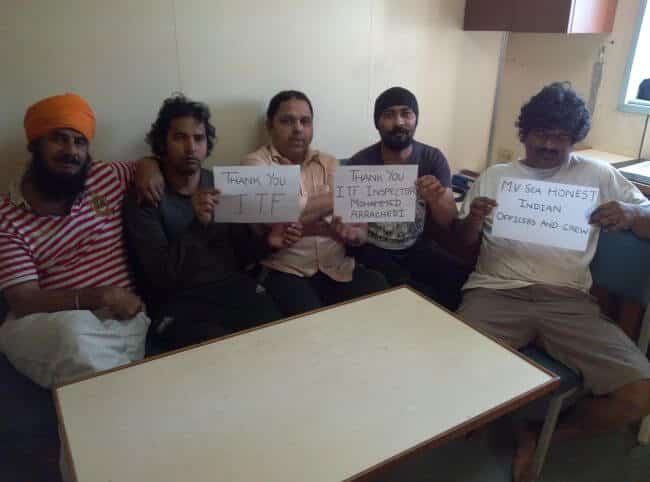 ITF inspector Mohamed Arrachedi explained: “The good news is that this long-suffering crew is now being repatriated, and the even better news is that they are now in receipt of the wages they have been owed throughout their long ordeal. These total USD151,823.”

He continued: “Their patience and resolution has paid off, and we all appreciate the help given them by Algerian trade unions, the port authority of Algiers Port and the embassies of India and Turkey. Without their and the ITF’s help these men would have starved.”

The Panama-flagged ship is owned by the Turkish company Vera Shipping, which settled the crew wages and has recruited new seafarers on board.

One of the crew members sent the following letter to Mohamed Arrachedi: “We the Indian officers and crew of MV Sea Honest would like to thank you from the bottom of our hearts for all the help and support you have given us all these 7 months. We are very thankful for the provisions and moral support you provided us when our life was in danger. Today all our problems are solved and it is all because of your hard work and concern. You always answered our calls and messages no matter what day or time and always guided us in every situation.

Today we are going home after all this bad 7 months.

We would like our fellow seafarers to know that we are not alone. The ITF is always with us to support us in all possible ways. Don’t be afraid in any such situations, approach them and your problems will be looked after. Thank you very much Mr Mohamed Arrachedi and Seddik Berrama and everyone who has been a part of solving this distress of MV Sea Honest.