An ITF delegation has met with New Zealand’s ministers of transport and labour, as well as the Auckland’s Mayor and city council, to voice first-hand the impact that automation poses to livelihoods of workers, their communities and the national and local economies.

ITF president and Dockers’ Section chair Paddy Crumlin, who led the delegation on December 4-5, acknowledged the constructive dialogue between the government, council and the international delegation: “What’s important is that the New Zealand Government and Auckland Council have committed to ongoing dialogue with MUNZ and the ITF on the introduction of automation at the Port of Auckland and the countries other ports.

“We thank the Minister of Transport Phil Twyford, the Minister of Labor Ian Lees-Galloway and the Mayor of Auckland Phil Goff and his councillors for the opportunity to talk directly about the financial impacts on productivity and profitability as well as social and community impacts on workers and the community of planned automation at the Port of Auckland. 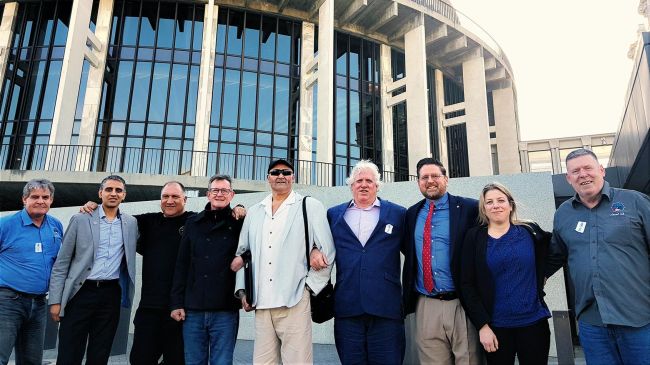 “Innovation should improve working conditions, not eliminate the workforce, and what I would also say is that for the people of Auckland this should be personal. There are very legitimate concerns about the impact of automation on jobs and the flow on effects on your local communities,” said Crumlin.

Crumlin also extended the ITF’s deepest sympathies to the families of those killed and injured in the White Island eruption, which took place shortly before they were due to meet with Prime Minister Jacinda Ardern.

“It is a traumatic and deeply shocking time for all those involved as well as the emergency services involved in the rescue including maritime services and the passengers and crew of the Ovation of the Seas. We look forward to meeting the PM on all of the important matters discussed in her absence and are deeply appreciative of the commitments made to us through her ministers,” said Crumlin.

The delegation shared their respective experiences and research commissioned impacts with the ministers and city council, particularly:

decreased productivity associated with the introduction of automation;
job losses and the flow on impacts on the community resulting from decreased expenditures from workers; and
health and safety issues.
The delegation also urged the government to back a comprehensive port strategy, including the need for strong maritime cabotage regulation and increased training and recruitment of national seafarers, to ensure the retention of skilled maritime workers, promoting safety and protect the environment and nations’ economic and national security.

The Ministers of transport and labour and Mayor of Auckland have committed to an ongoing dialogue with MUNZ and the ITF, recognising the importance of sharing and learning from the of other countries that have faced automation and have strong cabotage laws.