An ITF inspector helped bring an eight-month ordeal to a close for the crew of the vessel Newlead Granadino stranded in Baltimore Harbour in the United States, with the repatriation of the final six Filipino seafarers on 31 May.

The tanker experienced major engine problems on 20 September 2016 and was detained by the US Coast Guard for repairs. When the owner, NewLead, couldn’t pay for them, Nataxis, the bank that owned the mortgage, took the ship over and put it up for sale. 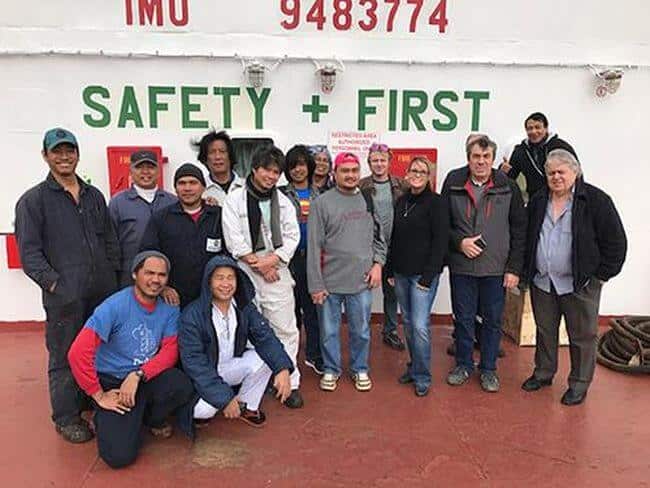 The crew was running out of food and water, and fished in the harbour to supplement their rations. The boiler was also broken throughout the winter months. The men were unable to go on shore because they lacked proper documentation and there were Visa limitations, and felt deserted and desperate.

ITF inspector Barbara Shipley from the Seafarers International Union led efforts to repatriate the crew, and the seafarers also received help from the Baltimore International Seafarers’ Center and the local community. InterOrient, the manning agent for the crew, paid for provisions before Raven Ship Management (RSM) was hired by the bank. RSM provided provisions, began paying the men regularly, and repatriated 12 of the 18 seafarers (six in November 2016 and six the following January). Ms Shipley ensured that the men were paid in full and given a small bonus.

Ms Shipley said: “This crew has been amazing. The conditions they’ve lived with and tolerated are just unbelievable. They’ve been so happy and so positive and it’s just a great day coming. The generosity of the people of Baltimore has been overwhelming and I’m very thankful for everyone that’s stepped up and helped out.”

ITF seafarers’ section chair Dave Heindel commented that this was another example of the brilliant, practical work carried out by the federation’s inspectors to help seafarers in distress.

The vessel was finally sold to Eurotankers Inc on 31 May. Once repaired, it will sail as the Asphalt Trader with a new crew.