The Madagascan Government will be the target of a protest at 08:30 tomorrow (18 October) at the African Ports Evolution conference in Durban, South Africa. The Congress of South African Trade Unions (COSATU), and its affiliate the South African Transport and Allied Workers Union (SATAWU), will demand that the government immediately take all necessary steps to reinstate 43 dock workers sacked at the ICTSI-operated Port of Toamasina

Ahead of tomorrow’s protest, Edga Mbina Mbina, SATAWU Provincial Secretary said: “South African unions stand shoulder to shoulder with these Madagascan dock workers. The Madagascan Government must ensure that they are reinstated, and that their right to join a union to fight for decent work is recognised and respected. Democratic countries respect workers’ rights – this is not what we are seeing in Madagascar.” 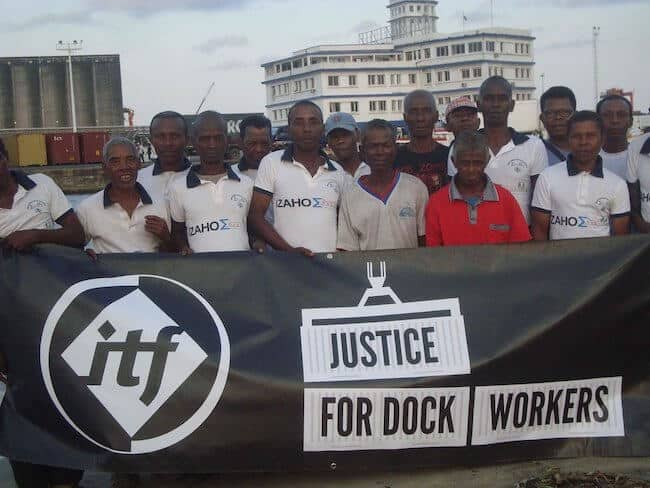 International Transport Workers’ Federation (ITF) President, Paddy Crumlin, said that the Madagascan Government’s refusal to enforce a court order recognising these workers’ right to organise – and failure to observe the basic human rights for their own citizens – is damaging Madagascar’s image not only across the region but around the world.

“The ITF stands in solidarity with COSATU and SATAWU with a clear message for the Madagascan government – the Malagasy 43 must go back to work.

“The Madagascan Government can solve this problem right now by showing real leadership and stopping this exploitation. The government should enforce its own labour laws and abide by international labour conventions. They must reinstate the Malagassy 43 immediately and allow SYGMMA to organise for all workers at the Port of Toamasina.”

The Malagasy 43 were employed by labour-hire company SMMC when fired in 2012 following legitimate union activity. None of the workers have been reinstated, and the workers’ union SYGMMA has not been recognised by SMMC.

The protest in Durban forms part of global week of lawful actions by ITF affiliates within ICTSI’s global terminals and shipping routes, in a renewed international push against the emerging pattern of labour violations across ICTSI’s global network. 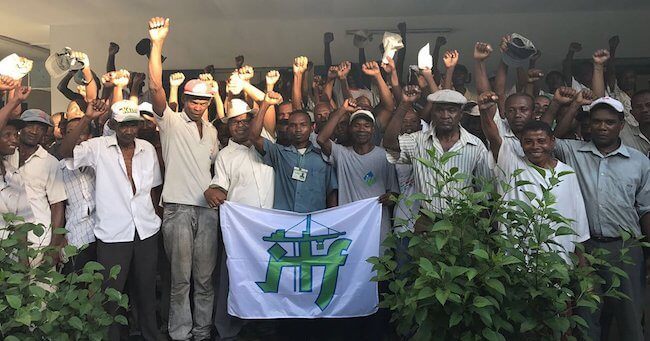 ICTSI’s Senior Vice President, Christian Gonzalez claimed this week that ‘ICTSI remains committed to the safety and welfare of our equipment operators’ and it’s time the company back up statements with actions.

“These workers in Madagascar deserve the right to be recognised as the bona fide workforce by ICTSI. All workers employed in stevedoring activities need to be treated as direct employees. It’s time ICTSI stopped taking shortcuts on these workers’ lives, on their families’ lives,” said Crumlin.

The ITF is attending the Ports Evolution conference to present its latest report – ICTSI’s global expansion: a risky proposition? – on the emerging pattern of labour violations across ICTSI terminals.

Madagascar is currently a member of the South African Development Community (SADC). In 2009, Madagascar was suspended from the SADC. This suspension was lifted in 2014, recognising the steps taken by the Government of Madagascar to return the country to democracy. The failure to reinstate the Malagasy 43, despite court orders recognising the union’s right to organise at the port, indicates that there is still more work to do to ensure respect for the rule of law and for the rights of workers and all citizens.