As part of a two-ship contract signed in December 2012 with TOTE, the 764-foot long Marlin Class containerships will be the largest dry cargo ships powered by LNG, making them the cleanest cargo-carrying ships anywhere in the world. This groundbreaking green ship technology will dramatically decrease emissions and increase fuel efficiency when compared to conventionally-powered ships, the equivalent of removing 15,700 automobiles from the road.

“Successfully building and delivering the world’s first LNG-powered containership here in the United States for coastwise service demonstrates that commercial shipbuilders, and owners and operators, are leading the world in the introduction of cutting-edge, green technology in support of the Jones Act,” said Kevin Graney, vice president and general manager of General Dynamics NASSCO. 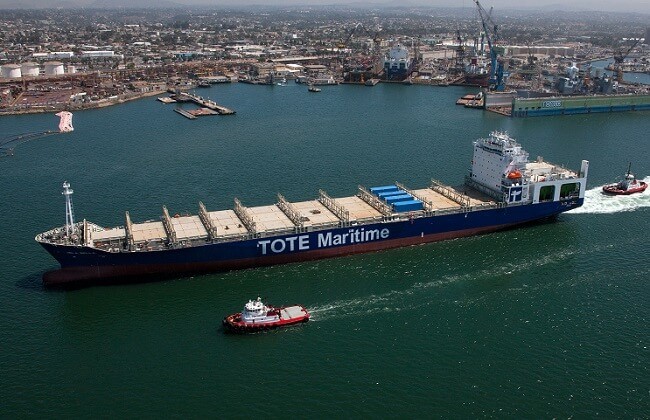 The delivery of this historic ship, also demonstrates successful collaboration between industry and regulatory bodies. TOTE, NASSCO, the American Bureau of Shipping, and the U.S. Coast Guard worked hand-in-hand from the beginning of the project to the delivery of the Isla Bella. This included collaboration during the design approval, construction and commissioning the ship to safely and effectively operate on natural gas.

As a complement to its government new construction business segment, NASSCO maintains an extensive history of commercial shipbuilding. In the past decade, NASSCO delivered eleven commercial ships and currently has ten commercial ships in its backlog, including the two Marlin Class containerships for TOTE.

NASSCO specializes in the design and construction of auxiliary and support ships for the U.S. Navy and oil tankers and dry cargo carriers for commercial markets. It is also a major provider of repair services for the Navy, with capabilities in San Diego, California; Norfolk, Virginia; Bremerton, Washington; and Mayport, Florida. Its San Diego location remains the only major shipyard on the West Coast of the United States conducting new construction and repair.