Self-reliance has long been part of Chinese philosophy, culture and policy. But recent moves by Beijing suggest the country is looking to import more iron ore from international producers, rather than use its own reserves.

China will cancel about one-third of its iron ore mining licenses, mostly belonging to small polluting mines as part of Beijing’s efforts to improve air quality, the Metallurgical Mines’ Association of China said on Wednesday. Over 1,000 mining rights will be eliminated under the plan, according to Reuters reports. 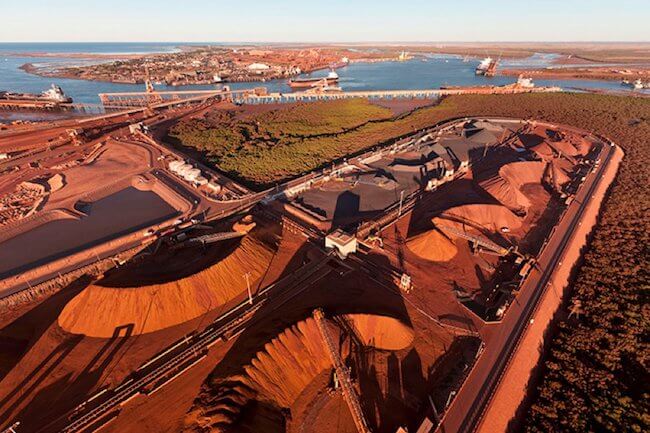 The number of iron ore mines in China have dropped from more than 3,000 to around 1,900 in recent years and continues to fall, Peter Poppinga, executive director at Vale said this week.

“Some of the mines are even importing some low-grade seaborne cargoes and upgrading them instead of investing the money in their own mines,” said Poppinga.

Quality is another issue that is influencing China’s import demand for raw materials. China’s raw iron ore is mostly low grade, with iron content of around 30% or less, compared with more than 60 % for iron ore produced by international miners.

While the commodities boom of the early to mid-2000s was fuelled by China’s infrastructural build-out at home, the country’s next big wave of construction will happen further afield and will also lend some support to international miners – and shipping.

China’s Belt and Road plans, in which the country will build roads, railways and ports around the world, could boost steel demand by an additional 150m tonnes and keep Chinese steel mills running for the next decade, BHP Biliton said this week.

BHP believes Chinese steel demand still has room to grow and won’t peak until the middle of the 2020s.

The miner has identified 400 core projects that would require $1.3tr of spending under the One Belt, One Road plan. Power, railways, pipelines and other transport projects make up 70% of the total investment, according to the FT. Those projects could lead to an additional 15m tonnes per year of steel over 10 years, boosting demand growth by an extra 3% to 4% on top of the current 1% forecast, BHP said, which would help sustain Chinese steel production rates at high levels over the next decade.

Analysis by HSBC, however, has urged some caution and says although an uptick in demand seems assured, it won’t be as significant as in the years pre-2009.

“Quantifying the potential impact on commodity markets of the Belt and Road Initiative is difficult, given the number of variables,” HSBC said this week, quoted by the FT. “On the demand side, how much spending will actually occur, and when, is highly uncertain. Supply is also uncertain, given China’s dominant role in many commodity markets.”

This is all expected to translate to increase demand for seaborne transport of raw materials, benefiting the capesize market in particular. This trend intersects conveniently with the rise and rise of Chinese ship financing, although it would seem this is more down to opportunity than design.

ICBC Leasing, Minsheng Financial Leasing and CMB Financial Leasing have all signed collaborations with commodity producers like Vale and Trafigura plus a number of major shipowners. Chinese banks started out by supporting deals involving the domestic shipbuilding industry but since 2015 have increasingly supported deals with no obvious China ties. Leasing deals with Chinese institutions have provided owners with a much-needed source of funding in the absence of bank and private-equity financing. Vale has offloaded a number of its 400,000-dwt Valemax vessels in this way. And the return on investment for China is assured if iron ore carriers benefit from One Belt One Road.