The European Investment Bank is providing EUR 155 million to finance two new passenger and vehicle ships for the ICG subsidiary Irish Ferries. The two ferries will increase passenger and cargo capacity on routes to Ireland, replace older and smaller vessels and significantly reduce emissions from the Irish Ferries fleet. The new ferries are expected to be used on both the Dublin-Holyhead and Dublin-Cherbourg routes to reflect demand for a greater choice of services from Ireland to Britain and direct to continental Europe.

The announcement was made as the W.B. Yeats cruise ferry made its maiden commercial voyage from Dublin to Holyhead this morning.

The largest ever EIB support for Irish shipping was announced during a visit this morning by Andrew McDowell, European Investment Bank Vice President and Eamonn Rothwell, CEO of Irish Continental Group. The latest addition to the Irish Ferries fleet, the new W.B.Yeats, was partly financed using EUR 75 million from the EIB. 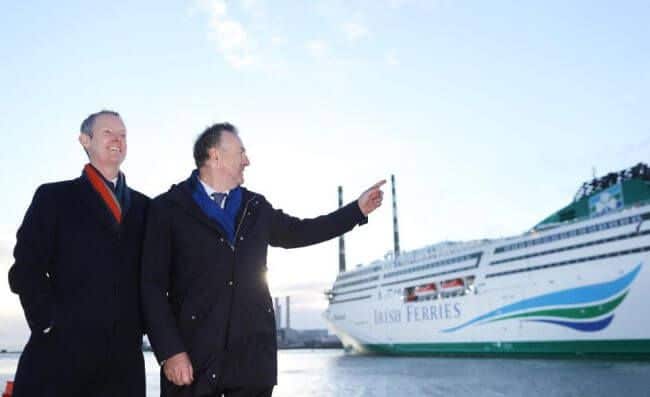 Eamonn Rothwell, CEO, ICG, said “Significant new investment is essential to expand the Irish Ferries fleet and better serve our customers increased demand for passenger and freight transport. The EUR 155 million financing facilities agreed with the EIB, alongside financing from leading Irish and international banks, for the two new cruise ferry ships demonstrates the EIB’s commitment to support transformational corporate investment such as this in Ireland, enabling ICG to deliver on its growth strategy and strengthening the tourism and cargo trading links in and out of the country. We were delighted to take delivery of the superb W.B Yeats in December. The ship is the next level in terms of the experience it offers our customers. After operating on the Irish Sea, the W.B. Yeats will move to service the busy Dublin Cherbourg route in the coming months.”

Andrew McDowell, European Investment Bank Vice President, said “Shipping connections are crucial for Ireland and the European Investment Bank is pleased together with ICG to support two new ships that will both transform maritime transport to and from this country and cut harmful emissions. The EUR 155 million long-term EIB loans will support EUR 309 million of new investment in best in class vessels that will serve Irish routes for years to come. The new W.B. Yeats, on its maiden voyage from Dublin today, together with the second vessel will transform freight capacity and passenger travel from Ireland to the UK and continental Europe. The first approval of financing under the EIB’s Green Shipping initiative reflects the firm commitment of ICG to cut emissions and improve fuel efficiency. Increasing maritime transport capacity reflects increased demand arising from Ireland’s export-driven recovery and the potential need for flexibility in the event of disruption on UK routes. In the context of EIB’s ever-increasing support for Irish private businesses, these two loans also demonstrate the value that EIB loans can provide to Irish corporates through beneficial pricing, long tenors and flexible loan structures.”

The long-term loan to Irish Continental Group represents the first support approved by the EIB under a new Green Shipping financing initiative that supports investment in new and existing ships to reduce emissions and improve fuel efficiency.

The EIB is providing EUR 80 million to finance construction of a second new vessel for Irish Continental Group’s Irish Ferries operations. Due for delivery during 2020, once operational this vessel will be the largest cruise ferry in the world in terms of vehicle capacity and provide Irish Ferries with an effective 50% increase in peak freight capacity.

The new ships have been designed to enable flexible use on all existing Irish Ferries routes between Irish, British and French Ports and the vessels will be used to reflect the increased tourism and freight demand.