A senior Irish coastguard pilot has died after a search and rescue helicopter crashed off the coast of Mayo in the Republic of Ireland during a rescue operation.

Reports said a major air and sea search is underway for the other three crew members missing after the accident. 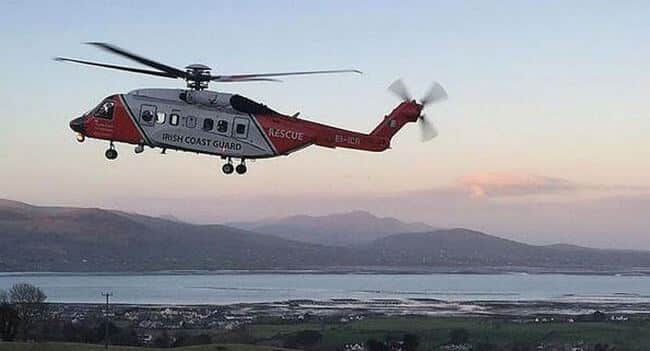 Captain Dara Fitzpatrick died at the hospital after being recovered from the water in a critical condition. The missing members in the crew are Chief Pilot Mark Duffy and winchmen Paul Ormsby and Ciarán Smith.

The Irish Coast Guard’s Sikorsky S92 helicopter crashed into the Atlantic while it was assisting another Coast Guard aircraft in a rescue operation on a UK fishing vessel.

Officials said the helicopter lost contact while it was on its way to Blacksod to refuel during the mission and the debris was discovered around six miles out to sea.

Irish Coast Guard Search and Rescue operations manager Gerard O’Flynn said there was no warning before the crash and there is no indication about the cause of the accident. The Air Accident Investigation Unit will be conducting a probe into the chopper crash, O’Flynn added.

Currently, the rescue operation is being carried out in an area around Blackrock lighthouse which is some 13 km west of Blacksod. Along with the Coast Guard, Irish navy, RNLI, police divers and several other fishing boats are also involved in the operation.

In addition, he Marine Institutes research vessel, RV Celtic Voyager, which is equipped with multi-beam radar, is also part of the operation.

The 42-year old mother of a young son, Capt Fitzpatrick was one of the senior pilots in the force. She reportedly started flying in 1990 and was part of search and rescue operations for the the past two decades.

Capt Fitzpatrick was one of the two female Coast Guard pilots who carried out the first all-woman mission for the service three years ago.