Both the extent and pace of growth in container volumes have put strains on a wide range of operational procedures and the physical hardware employed to handle the steel boxes, particularly onboard ships. Attention to numerous factors is needed to avoid repeated casualties

‘Container Casualties – the sum of the parts’ looked in detail at the complex range of moving parts involved in these operations and concluded that each must be considered individually and collectively in order to keep the collapse of stow incidents to a minimum. 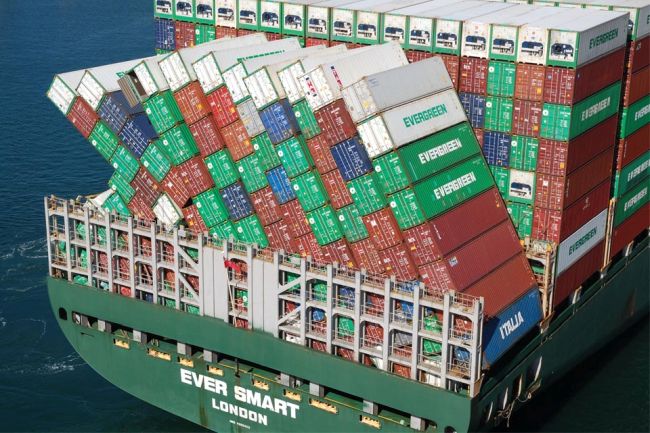 In chairing the session, UK P&I Club’s Loss Prevention Director, Stuart Edmonston set the scene, “Container loss incidents attract attention. Overall, the industry loses a relatively small amount of roughly one unit per 160,000 carried but each loss has significance to a range of stakeholders, including the ship operators, cargo interests, insurers and, not least to the natural environment both at sea and on shore.”

A review of the webinar proceedings highlights the wide range of influences that can impinge on stack collapses on ships and the potential loss of containers overboard. Peregrine Storrs-Fox TT Club’s Risk Management Director took the lead in summarising these. “While adverse weather and the avoidance of it through to considered design and construction of container ships are clearly vital, the ‘moving parts’ of causation range through all aspects of container operations. TT Club is involved in all aspects of the container supply chain, but uniquely concentrates its energies on those factors considered within the Cargo Integrity campaign that have bearing on this type of casualty, such as the correct declaration of cargo mass as well as the safe packing and securing of the freight within the container, together with the container structure and maintenance.”

Ship-board factors run from proper inspection and regular maintenance of deck fittings, locking bars, twistlocks and lashing bridges, to the use of accurate data to predict parametric rolling and other ship motions, and the incidence of a so-called ‘stiff ship’ situation, at the design and construction stage. Neil Gardiner of casualty investigators, Brookes Bell lead the discussion on this area of causation. “In addition to taking into account the bending motions of ships in heavy seas in the design of, particularly, the larger container ships of today, operational prevention of isolated and unnecessarily high stacks coupled with high GMs should be prioritised,” advised Gardiner. “The whipping action that ships often experience can have a significant effect on high and isolated container stacks that may have been left between interim discharge/load ports to avoid restowing.”

From the legal perspective Tom Starr, Senior Claims Director at UK P&I pinpointed the difficulties in establishing causation and liability. “The very nature of the modern container shipping industry, the very large and sophisticated ships and the involvement of numerous parties means that evidencing seaworthiness, proper stowage and the cause of a casualty is a huge challenge,” explained Starr. “Add to this the variable investigation standards of flag states in conducting official investigations; it may be unsurprising that lessons learnt for the future can be speculative.”

From a plethora of audience questions, one was noteworthy: challenging the panel to suggest their most pressing improvement to oil the moving parts driving this issue. “It is a shame that the MARIN report Lashings@Sea was only partially followed through; there are a number of outstanding recommendations,” was Storrs-Fox’s answer. “That study itself was in relation to ships around 10,000 TEU, so less than half the capacity of the largest now in service. A second MARIN type research, picking up the unresolved actions, and drawing on developments in technology and the other factors would be valuable in increasing safety and certainty in shipping.”

For Gardiner more accurate data on the physical forces at play on containers stacks to be used in calculations at the ship design and construction phase and for Starr better communication between all parties. “When these casualties occur and are under investigation, it is only through more transparency about the actions of the moving parts that future incidents can be minimised,” he concluded.

Tackling container ship issues: ‘Container casualties – the sum of the parts’ from TMTV on Vimeo.