A report released by Oceana Canada reveals that a voluntary slowdown measure put in place by Transport Canada this year to protect critically endangered North Atlantic right whales from deadly ship strikes in the Cabot Strait is being largely ignored. High vessel speeds put North Atlantic right whales at even greater risk of being killed by ship strikes – one of their leading causes of death.

North Atlantic right whales are one of the most endangered marine mammals on the planet, with only about 400 individuals remaining. They were designated as critically endangered by the International Union for Conservation of Nature earlier this month, reflecting the species’ extremely high risk of extinction. In June, a right whale calf was found dead off the coast of New Jersey, likely due to fatal ship strikes.

In January, a calf was found injured off the coast of Georgia and is presumed to be dead due to severe ship strike wounds. Fatal ship strikes and entanglements in fishing gear are top threats to this species, with overall deaths now outnumbering births. At least 31 North Atlantic right whales have been found dead since 2017, 21 of them in Canadian waters. Oceana Canada is calling on Transport Canada to take action by imposing a mandatory speed limit in the Cabot Strait, a key passage for these whales to their summer feeding grounds. 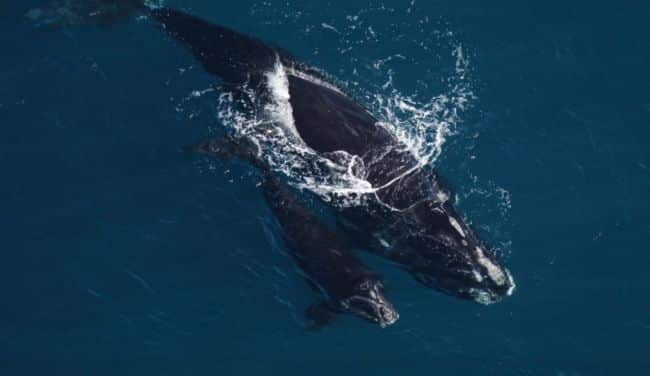 Oceana Canada’s report, Dangerous Passage, demonstrates the urgent need for a mandatory slowdown. Using Global Fishing Watch data, which is a component of the new, innovative tool called Ship Speed Watch,* Oceana Canada tracked ship speeds in the Cabot Strait from April 28 to June 15, 2020. During this 49-day period, Transport Canada asked vessels longer than 13 metres to slow down to 10 knots. Exceptionally few complied, with 67 per cent of the ships (464 out of 697) travelling faster than the 10-knot limit, and some vessels even travelling 20 knots or faster. Studies have found that slowing ship speeds to less than 10 knots in areas where these whales may be encountered can reduce the lethality of collisions by 86 per cent.

As a result of these findings, Oceana Canada is urgently calling on Transport Canada to immediately upgrade the slowdown zone in the Cabot Strait from voluntary to mandatory, with enhanced monitoring and surveillance of the area to better understand when and where whales are present. The current voluntary measure will go into effect again from October 1 to November 15, 2020. As of July, 90 North Atlantic right whales have been seen in the Gulf of St. Lawrence.

“We know that slowing vessels down increases the likelihood of whales surviving a collision. The more we can do to require slowdowns, rather than making them optional, the better this species’ chance of survival will be. Transport Canada must immediately implement a mandatory slowdown in the Cabot Strait to effectively protect North Atlantic right whales. In an industry where speed often provides a competitive advantage, we’re concerned that voluntary measures create a disincentive to comply and reward those who do not. A mandatory measure levels the playing field – and, more importantly, will help prevent more whale deaths.”

“Ship Speed Watch empowers the public, decision-makers and the government to track ship speeds in near real-time in the speed zones established to protect North Atlantic right whales. For too long, we could only hope that vessels were obeying the speed limits, but with Ship Speed Watch, we can clearly see that ships are ignoring speed zones designed to protect this critically endangered species. To protect North Atlantic right whales, we need to expand mandatory speed restriction zones that require ships to slow down when whales are present along their migratory routes. The U.S. and Canada must step up now to protect this species before it’s too late.”

Ship Speed Watch is an innovative tool launched to the public today. Oceana’s Ship Speed Watch allows users to monitor ship speeds and positions in areas frequented by North Atlantic right whales along the East Coast of Canada and the U.S. in near real-time. The tool uses self-reported data to show ship locations, ship speeds and active voluntary and mandatory speed restriction zones. The tool also provides additional information about speed restrictions in place to protect this endangered species. When mandatory and enforced, speed restriction zones can help prevent deadly collisions with ships, one of two leading causes of North Atlantic right whale injury and death. Ship Speed Watch was created based on Automatic Identification System (AIS) data from Global Fishing Watch, an independent non-profit founded by Oceana in partnership with Google and SkyTruth, which uses cutting-edge technology to interpret data from various ship tracking resources.