During the Baltic Tour from 7th to 23rd October 2015 Becker Marine Systems will be presenting the LNG Hybrid Barge in Copenhagen, Rostock and Kiel. The barge works like a floating power plant that can supply low-emission power to cruise ships during their layovers at port. In each of the three cities a press conference will be held and it will be possible to visit the barge christened the HUMMEL daily between 9 am and 6 pm. Guided tours are possible after prior registration at HummelBalticTour@LNG-Hybrid.com. 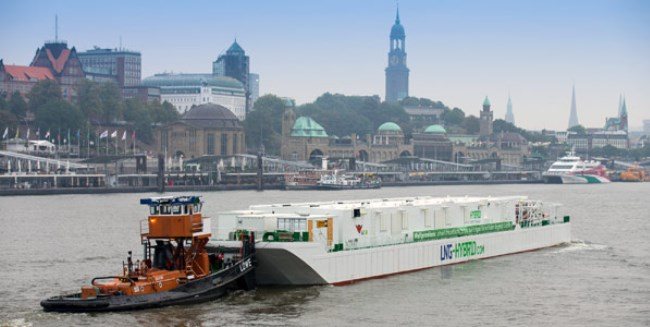 The schedule for the LNG Hybrid Barge Baltic Tour:

With the assistance of a tugboat, the LNG Hybrid Barge will thus be leaving the port of Hamburg for the first time in October. Since spring it has supplied environmentally friendly power with an output of 7.5 megawatts to the AIDAsol cruise ship during each of it layovers in Hamburg. “With the Baltic Tour we would also like to draw the attention of other cities to the environmentally-friendly technology made possible by the use of the low-emission fuel”, said Dirk Lehmann,
Becker Marine Systems’ Managing Director.

The barge developed and operated by the Hamburg-based company works like a floating power plant that via a gas container filled with 15 tonnes of LNG (“Liquefied Natural Gas”) generates and transfers power to the ship. In doing so, the LNG Hybrid Barge emits no sulphur dioxides or soot compared to conventional marine diesel with 0.1% sulphur content. Emissions of nitrogen oxides and carbon dioxide are also significantly reduced.

“After the first months of use, the LNG Hybrid Barge is already considered one of the cleanest options for supplying shore-side power to cruise ships and is making a significant contribution towards improved air quality at port cities”, said Lehmann. In future, Becker Marine Systems would thus like to offer environmentally-friendly LNG technology not only to cruise ships, but to container ships, bulkers and tankers as well.

Another step in this direction was taken on 30th September 2015. On this day, Becker Marine Systems signed a “Memorandum of Understanding” with Netherlands-based shipping company KOTUG for the operation of an LNG Hybrid Barge. Accordingly, the new barge could already be supplying ships with low-emission power at the port of Rotterdam starting in 2017.